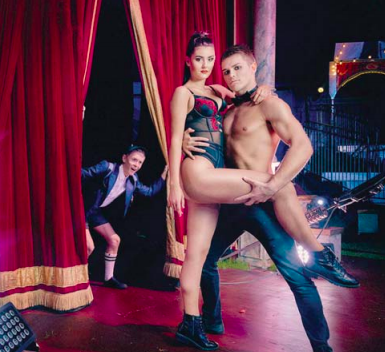 A scene from the Cabaret Circus performance

After a stellar season at the Spiegel Big Top at Gosford waterfront, Infamous, the adults only, cabaret-style circus production, is headed to the grounds of Mingara Recreation Club from May 18 to June 3.

Those who missed out on securing tickets for Infamous’ final, sell-out weekend in Gosford now have the chance to snap up tickets and witness an outrageous performance that takes the convention of a traditional circus production and sends it to new heights. Infamous is a combination of burlesque and circus acts which feature sensuous dancing, breathtaking stunts and mischievous comedy to entertain audiences. Performances will be held under the Spiegel Big Top on the grounds of Mingara Recreation Club with shows every weekend from opening night.

Creator of Infamous, Mr Joseph Ashton, says the performance is a one of a kind experience that offers an energetic and hilarious burlesque performance combined with death-defying aerobatics. “The show takes traditional circus acts to the next level. “Our ‘Wheel of Death’ segment, which sees two circus artists perform acrobatics on each end of a 10-metre-high spinning apparatus, leaves guests on the edge of their seats,” said Mr Ashton. “We’ve had some amazing feedback so far from our audiences in Gosford.

“A lot of people have even come back to see the show for a second or third time,” he continued. Before their stint at Gosford, Infamous circus artists performed high- flying trapeze acts for a crowd of thousands at the Sydney Royal Easter Show. “Our Big Top shows are a much more intimate affair, with premium ringside seats available for those who want to get up close and personal with the action. “Guests can enjoy a fully-licensed bar that opens an hour before each performance. “It’s a great chance for friends to meet after work, have a drink and enjoy some quality entertainment,” said Mr Ashton. “Now’s your last chance to catch a once in a lifetime performance while Infamous is still on the Coast,” concluded Mr Ashton. Early-bird tickets are available until May 13 with a discount of 20 per cent for A and B Reserve seating. After Mingara, Infamous will head to Newcastle followed by the Gold Coast.

Mingara to spend $3.2 million for a new entry way

Building fire at The Greens The Entrance