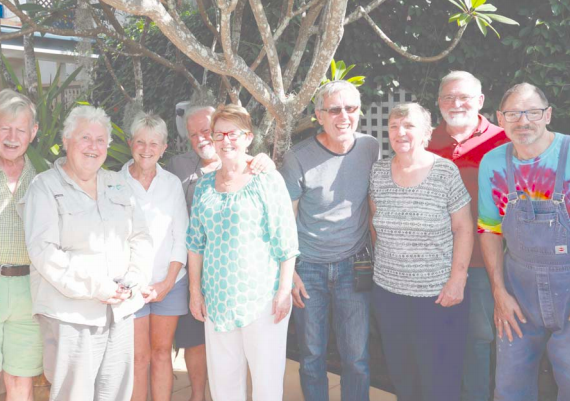 Mr Jim Doe said the group had a very enthusiastic membership which had enjoyed working with Ms Holloman for many years. “I know there is a little-abandoned settlement in the bush area our group takes care of that was totally covered in lantana. “When we started, it could not be seen,” Mr Doe said. “Deb organised for us to work on it and now there is not a piece of lantana there,” he said. “We have been able to do that kind of work all through our area of the National Park thanks to Deb’s leadership. “The native palms had almost died out but now you can walk through lush green areas of them.

“There are about eight members in our group and we go out once a month so enthusiastically. “A barge takes us from the jetty in Woy Woy Bay to areas we can’t get to by walking and a whole barge load of people attack the weeds.” The group held a luncheon for Ms Holloman on Saturday, April 21, and invited members of other bushcare groups that she supervised.

Mr Doe said some volunteers were concerned their groups might “fizzle out” if the NPWS replaced Ms Holloman with a supervisor who could not run weekend groups. “We cannot do the work without supervision and many of us have other community responsibilities,” Mr Doe said. The National Parks and Wildlife Service has not announced a replacement for Ms Holloman or whether weekend bushcare groups would continue.