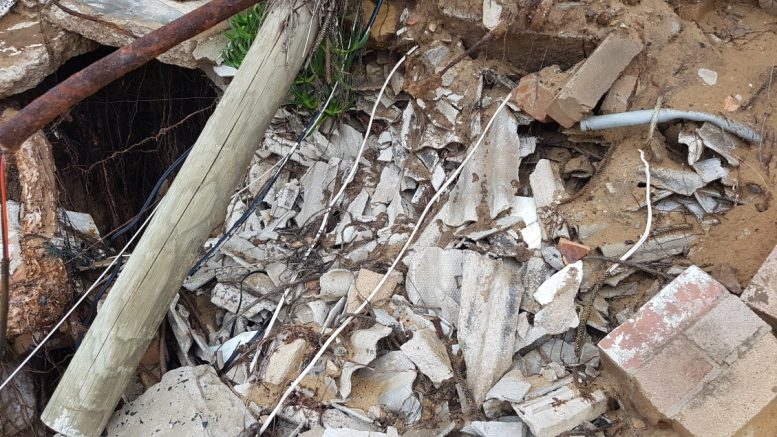 Mr Pat Aiken of Coastal Residents Inc has used a Central Coast Council debate about reports being kept confidential, to raise concerns about a “cover-up” of asbestos at Wamberal Beach.

Mr Aiken said he had paid an independent laboratory to test materials he had collected from Wamberal Beach, and multiple types of asbestos had been identified as present in the materials. According to the SERS laboratory results, all four samples included Amosite Asbestos (AMO), Crocidolite Asbestos (CRO) and Chrysotile Asbestos (CHR). “Why is it that a report on the impact of the June 2016 storm on Wamberal Beach can’t be published in the public domain, when the Council has stated that it is a document with high public interest?” Mr Aiken asked when addressing Councillors at the April 9 meeting.

“Why does someone have to sign a copyright form and give two days’ notice to view of copy of this report for up to two hours, when it could be available on Council’s website to make access much easier and simpler? “And why did Council literally cover up a legacy dumping of asbestos on Wamberal Beach instead of removing it before another major storm event sweeps it into our local environment?” he asked. Mr Aiken was referring to Central Coast Council’s efforts to use sand from the beach to cover building materials and debris exposed by the 2016 storm with sand, rather than removing it from the beach. Some material was removed.

“I have got video evidence, I have got a lot of documentary evidence, I have documented very well, I have no doubt that there is a significant amount of asbestos at Wamberal, it is on public land. “Council initially denied it is on public land, but it is on a public beach.” Mr Aiken also outlined the lengths he had to go to to gain access to a document about erosion at Wamberal Beach. Council made the report confidential, so Mr Aiken had to apply via Government Information Public Access (GiPA), a process that can be lengthy. He was then informed he could only inspect a heavily redacted version of the document. He then appealed to the Information and Privacy Commission, who ruled that the document should not have been so heavily redacted by Council. “Council reduced the redaction, but did not add it to their register for matters relating to GIPA.”

Mr Aiken explained to the meeting that it was Council who held copyright over the document, and one of its units did not want the document released. “I am aware that all Councillors here tonight had an election policy of maintaining open and transparent governance,” he said, but contended that information of public interest was now being “buried under layers of bureaucratic secrecy”. “We don’t release our confidential documents ever,” said Clr Greg Best, following Mr Aiken’s address to Council. “So, if we do an arrangement or a deal somewhere…the public out there says this is terrible, why have you done it…we don’t explain six weeks, months, or even years later…the real reasons for our decision.” Mayor Jane Smith questioned whether there was evidence that the amount of information being kept confidential by Central Coast Council was actually increasing. “We just spent $40,000 in the past few months on additional legal advice around confidential matters that we haven’t released, on the vegetation policy, the airport, dredging, and a couple of others we decided to lock away,”

Clr Best responded “We have got two in confidential tonight,” he said. Acting CEO, Mr Brian Glendenning, said although there was no formal policy around keeping items confidential, Council had recently “entered a process where there is a proactive release of material”. Staff at the next ordinary Council meeting will be detailing a proposed new policy process around the proactive release of information formerly held as confidential. “There is no policy to actively release and we have said we will pursue that.” Clr Doug Vincent said: “My experience at the moment is this Council is on an agenda to release confidential items. “My experience on previous councils has been, and particularly on the last Wyong Council, the six pack had an art of locking things up in confidential.

“I am finding this Council, as opposed to previous councils I have been involved with, more liberal in sharing documents with the public.” “I think we can acknowledge there is a practice of keeping matters confidential,” said Clr Louise Greenaway. “If we are discussing something that involves salaries or CVs, I think the public understand, but on other matters, I think the public are justifiably outraged. Clr Greenaway said she believed Central Coast Council needed to “review its policies in regard to informing the public as to the reasons behind making documents or business confidential, “because I think the community is fed up with being excluded and not being told why. “I don’t believe the Copyright Act was ever intended to restrict public access to local government documents,” she said. Council agreed to provide Plain English explanations, in addition to outlining the section of the Local Government Act that was the basis for keeping something confidential, in future Council agendas.