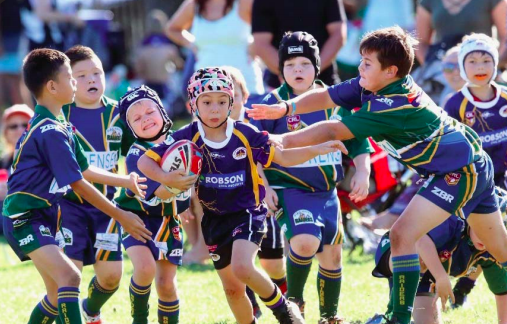 A big Narara crowd turned out to watch Gosford's under 8s clash with the Raiders Photo: Andrew Stark

The fluctuating climatic extremes of March have forced the Gosford Kariong Storm Rugby League Club to truncate their planned preseason build up as the opening competition round of 2018 beckons.

It was a month of Sundays that did offer much variation, as sweltering heat eventually gave way to a week of heavy rain. A waterlogged playing surface required the abandonment of all trial games set down for Sunday the 25th, while the high temperatures of the previous weekend had thwarted the Under 14’s,15’s and16’s in their attempts to get onto the field and play some football. The extreme weather has ensured that a number of Gosford’s teams will head into the opening round with just the sole practice game under their belts. One such side is the Storm Under 15’s, whose lone trial game was played during early March and resulted in a rather one-sided affair.

The Gosford boys ran in a host of tries against Blue Haven, and looked, to the casual observer, like absolute world beaters, until it was noticed that the Raiders only had 10 players on the field. Despite the Storm’s low key preparation, high hopes are held for this squad, as they attempt to improve on their third-placed finish of 2017. The Phil Keene coached Under 12(1)’s are shaping up well after a couple of solid preseasons hit outs. Pipped by the Blue Haven Raiders in their opening trial, the Gosford boys ran riot against Asquith seven days later, to record a hefty win over their northern Sydney opponents, in stiflingly hot conditions. Talented fullback Benji Keene-O’Keefe has begun 2018 full of running and had the distinction of scoring long distance tries with his first touch of the football in both trial games.

The Under 12’s narrowly missed qualifying for last season’s semi-final series and have been bolstered this season by the addition of two former Storm juniors; Bailey Chislett and Richard Darrell, who return to the club after stints with Woy Woy and Muswellbrook respectively. Another addition is Angus Newing from Erina, who has slotted nicely into the team’s forward pack and shows plenty of promise. If the scant trial form is to be taken as any sort of yardstick, then Gosford’s Under 10,11,13,14 and 16 divisions may well be heading into the opening round a tad underdone. As of March 26, the Storm’s Under 16’s team remains a tad skinny for numbers and would welcome any interested local lads to come down and have a run. This year’s Central Coast junior rugby league competition kicks off on Saturday, April 7, weather permitting.