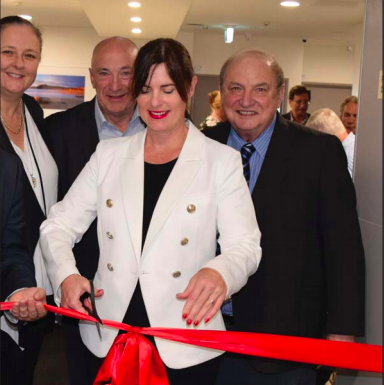 A new rehabilitation and research clinic was officially opened at Brisbane Waters Private Hospital on March 22.

The NSW Ministry of Health gave the hospital approval in early March to accept patients into the $10 million facility. Work started on the new clinic in January last year. It includes 24 rehabilitation beds, a gym, hydrotherapy pool, and a separate entranceway and facilities for outpatients. The space also includes an expansive front reception area, office and administration spaces, a cafe and therapy gardens. “The new Rehabilitation Ward has been built with guidance from the director of rehabilitation, Associate Professor Michael Pollack,” said hospital chief Ms Kathy Beverley.

“The opening of the new ward is an important occasion for the hospital and also coincides with Professor Michael Nilsson commencing in a consultative capacity at Brisbane Waters,” she said. She said the rehabilitation services offered by Associate Professor Pollack, along with Dr Arooge Shafi and Dr Stephen Chung, would be of the highest standard. They would “help close the gap in the Coast’s health services compared to other regional capitals or the alternative commute to city-based services,” she said. Associate Professor Pollack said: “Rehabilitation is usually geared towards people with some limitation of function, so travel and transport is often much more difficult for them.

“Having a local service that delivers what they could usually only get in Sydney or Newcastle is really important. “We need to make sure that what we are doing here is world class and a true boon to the Central Coast,” he said. He said it was truly a local project with construction materials sourced from suppliers across the region and each of the 24 new rooms being named after a location on the Peninsula.