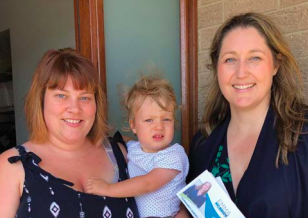 Member for Dobell, Ms Emma McBride, has been asked to help a large number of National Disability Insurance Scheme (NDIS) participants in her electorate due to delays and funding cuts.

“The Turnbull Government must immediately lift its staffing cap on the National Disability Insurance Agency and ensure IT problems are fixed to address these concerns,” Ms McBride said. “My office has been asked to help 184 NDIS participants and/or carers because they can’t get answers from the NDIA about mistakes in their plans and cuts in their support,” she said. “Participants have complained about a number of issues including: plans being developed with little or no input from participants; coordinators will not meet participants face-to-face; unnecessary reviews are resulting from a lack of consultation prior to a plan’s approval; money not able to be spent in one plan not being reinstated in the next plan; quotes for equipment and modifi cations taking too long to be approved, requiring a second quote and a second occupational therapist report; injuries occurring because equipment or modifi cations are not being provided promptly; and, there is no complaints process. “Participants must see plans prior to approval.

“I am committed to ensuring the long-term success of the NDIS, which has changed the lives of so many people on the Central Coast. “But there are many frustrations with its rollout that the Government must fix.” Ms Katie Ansted is a mother of three from Hamlyn Terrace, and all three of her sons have disabilities. She is one of the constituents that has been helped by Ms McBride’s office. All three have very high needs, but Ms Ansted has been told that she may have to wait up to six months for an NDIS package for her youngest son, who has been diagnosed with Cerebral Palsy. She said she has already waited 12 months for a carer’s payment. The couple moved up from Sydney to buy their own home, and don’t want to lose it. They can’t afford private therapies for their children, but the publicly funded therapies on offer are not sufficient for the boys’ high needs. Ms Ansted said their eldest son, Ralph, who is now six, was the first to be diagnosed in July, 2017, with autism. Her three-year-old son, Max, who is now five, was displaying similar traits, so he was also tested and diagnosed with autism and other conditions. Finally, her one-year-old was having major mobility issues and was diagnosed with Cerebral Palsy, global development delay and is also likely to be on the autism spectrum.

Max is currently under assessment by the NDIS and Ms Ansted is hoping that baby Jake’s assessment is fast tracked. Within the last few weeks, she has been sent another form to fill in for Max. “I asked how much longer it would take, this surely must be the last stage, and I was told it could be another three to six months wait,” she said. “Jake’s approval for NDIS came through very quickly, but we had to wait six weeks for a planning meeting, and it can take up to six months because a lot of people are waiting.” While the young family waits, Jake has needed orthopaedic boots and they have had to set up a therapy area in their house. “Jake could be six months away from having a plan, and he is the most in need of assistance because of his mobility issues,” she said. “Financially it is not great, it took over a year to gain my carer’s payment, and after I found out about Ralph, I knew I could not go back to work, which was a huge upset,.

Husband Ross has reduced his work hours to 25 so he can apply for the carer payment. “It is pretty extreme and we are taking a risk with this, we are treading water and have got a mortgage to pay.” According to Ms McBride, “The current staffing cap beggar’s belief, because I think that is one of the biggest contributors to the long delays we are seeing. “I came away from a visit with Katie Ansted so distressed because they are in a situation where they have moved from Sydney to buy an affordable home, have had three diagnoses in 12 months, they are incredibly resilient but now the husband has been told to reduce his work hours to 24 per week. “The NDIS can transform lives but what it takes is a proper commitment from whoever is in government to make sure it is always supported, and that may mean the right resources, the right level of attention, but it should be something that is beyond the political cycle.”