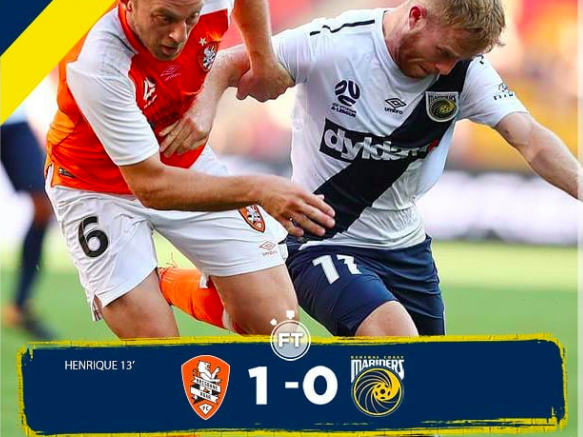 The Central Coast Mariners have fallen narrowly to Brisbane Roar at Suncorp Stadium thanks to a strike by Henrique.

Interim coach Wayne O’Sullivan was upbeat at the post-match media interview “Once again, I was proud of the boys’ performance,” O’Sullivan said.

“In the first half, in particular, we had some good chances and if they go your way early doors obviously more momentum comes from that.”
“We came with a plan, we executed that plan pretty well and the one time we didn’t execute it they hurt us and we got it wrong with the movements at that moment – they made us pay for it. They got the job done, they got three points and we didn’t. We were happy with large parts of the performance but disappointed with the result.”
“Wales has been exceptional as a young player developing this year. He’s been given lots of opportunities, has been training full time with our first team. He’s taken those chances really well. Lachie played in a position he doesn’t normally play but like every position he’s played in the A-League he grabbed the opportunity, ran with it and did a really good job.”

“No matter what, we’re going to stay strong. I thought when we went 1-0 behind tonight we showed that in abundance and came back strong, so if we can continue like that for the last two weeks, hopefully, we can finish with a couple of good results to go with some nice performances.

The goal was scored by international Henrique in the 13th minute after a pass from Jack Hingert released Eric Bautheac on the right and he cut a smart pass back to Henrique, who finished smartly into the bottom left corner.

GOAL: The Mariners’ encouraging start was silenced as Henrique buried an early opener.
CHANCE: Blake Powell sliced a bouncing ball wide from inside the area.
CROSSBAR: Incredible scenes as Andrew Hoole’s superb free-kick hits the underside of the bar and bounces off the line, before Powell and Alan Baro spoil each other on the follow-up header.
PENALTY SHOUT: Roar appeal for handball against Kye Rowles, but the referee waves claims away.
SAVE: The Mariners looked certain to draw level, but Jamie Young makes himself big to deny Connor Pain at point-blank range.
CHANCE: Ivan Franjic’s header is nodded off the line by Rowles on the edge of half-time.
CHANCE: Hoole dribbles with promise to the near post, only to waste the moment but his cross isn’t finished by the charging attackers
DISALLOWED: Massimo Maccarone has a goal chalked off for Eric Bautheac’s push in the process.
SAVE: Ben Kennedy gets down low to keep out Jack Hingert’s effort from a tight angle.