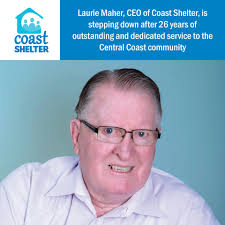 At the recent Homelessness NSW Conference, held in Wollongong, Mr Laurie Maher, CEO of Coast Shelter, was a recipient of the prestigious Lifetime Achievement Award.

Ms Shayne Silvers, Operations Manager, Coast Shelter said: “This Award was truly earned and given to Laurie to acknowledge his personal milestone and the contributions that his years of service represent.” The theme of the Homelessness NSW Conference was Housing Ends Homelessness. A highlight of the Conference was the importance of investing in social and affordable housing options to prevent and respond to the growing rates of homelessness, which has shown, according to the 2016 ABS Census, an increase of 37 percent in NSW.

The Central Coast figures too have risen from 766 people in 2011 to 1,031 in 2016. “I would suggest however this number could be higher as I’m not sure they capture all the couch surfers, those living in their cars across our Central Coast suburbs, and the overcrowding, what we in the homelessness sector call the hidden homeless,” Ms Silvers said. “Laurie has been a tireless advocate for those homeless and struggling to keep the ‘wolves from the door’ for 26 years, so winning this Award was a special recognition for Laurie’s continuing passion, dedication and commitment to all he has accomplished in the Specialist Homelessness Services Sector and the Central Coast community,” Ms Silvers added.

Claire Braund is Terrigal’s Woman of the Year