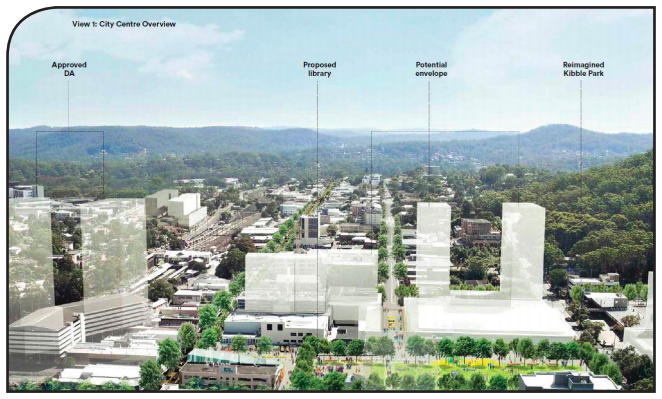 City centre overview including diagrams of proposed and approved developments

The NSW Government Architect has released the first of three Place Reports that will make up the Urban Design and Implementation Framework (UDIF) for Gosford City.

The report, called the Civic Heart, along with the current (draft) version of the UDIF, an executive summary, appendices, key dates and frequently asked questions, including how to make a submission, are all available on the Go Gosford website (gogosford.engagementhq. com). The Central Coast Coordinator General, who has oversite of the development of the UDIF, has been true to her word and, rather than throw out previous work on revitalising the city, the Government Architect (GA) has started its work where 2007-10, Our City, Our Destiny masterplan, fell into abeyance. “The broad objectives, principles and city framework in the UDIF are essentially the same as Our City Our Destiny,” the current version of the UDIF said. “What is different is a recognition of the physical scale of the city, market demand, Gosford’s specific role as a regional capital, and how this impacts on recommendations for implementation,” it said.

The report outlines “Civic heart design principles” including improved wayfinding, pedestrian access, social infrastructure, and alignment with a city centre plan for a Green Grid. “Building design needs to promote street frontage activity, connectivity, mobility, and visual impact,” the report said. The proposed redesign of Kibble Park will “ensure solar access and limit/prevent overshadowing [and] … identify and protect view corridors. “Kibble Park becomes the centre of a wider green circulation network linking the northern city centre, station and waterfront.” The report outlines the park’s current constraints, including: not attractive enough to draw people to Gosford; the park is cluttered which reduces its flexibility; perceived safety problems particularly at night; it is hidden from the street; poor accessibility and connections across the park; lack of greenery; cars cut off space from the Imperial Centre and take up space; conflict with loading and servicing; issues with maintenance; fountain never works; taxis are ugly; and the location of stage doesn’t work for events.

The GA said the redesign of Kibble Park could declutter it to create a sense of space and ensure the design allows for flexible use, including performances, markets, outdoor movies and festivals. The intention would be to make visual and physical connections to Presidents Hill and Rumbalara Reserve, improve its connection to Mann St, maintain sunlight to public spaces, reuse the library for public uses such as a gallery, or temporary exhibitions, a meeting space or town hall.

The first report states an intent to give the park active uses that attract a diverse range of people surrounding the park, to introduce additional footpath eating for restaurants and cafes, more night-time and weekend activity, something to protect the space from traffic on Henry Parry Dve, improved pedestrian and cycle access to the park, more outdoor dining opportunities, food trucks in the short term to kick-start a market, a better playground and a water feature that kids can play in to cool down. “With the formation of a new library, the existing library has the potential to be readapted for other public uses,” the report said. “The Council has been considering community uses, or the function of a Town Hall. “The building is centrally located in the heart of Kibble Park on Donnison St … was finished in 1973, and designed by Alan Williams and Associates.

“It is considered to be architecture of significance by the Australian Institute of Architects.” Overall, the GA’s proposal for the future of Kibble Park is to create a green room to give respite for the growing city. They also want to create a civic plaza and connection with Mann St, with active edges and a streetscape upgrade. They will also establish a through connection to Watt St and align a connection to the new regional library, and explore secondary connections between the regional library, TAFE, the Conservatorium of Music, and Council. They will investigate the opportunity to retain public parking in part of the future development behind an active edge to Henry Parry Dve. Tree plantings along Donnison St will be used to connect the park to reserves at Rumbalara and Presidents Hill.

They also want surrounding high developments to be located to minimise overshadowing of the park. Park uses will be moved to its edges to create active streets and diverse edges for people to gather [so] …the open space can breathe. “The park becomes iconic, grounded by a beautiful borrowed view to President’s Hill. “Mann St Plaza and the re-purposed library become fl exible event spaces for day and night activation. The GA’s proposal would “ensure solar access for four hours to 50 per cent of the park between 9:00am and 3:00pm at the winter solstice. The report also aims to: “protect and promote the fi ne grain retail of Mann St; ensure active and defi ned street frontages to all park edges; curate diverse offerings for different demographic segments, and for activation during day and night, weekdays and weekends. “Vehicle access is retained around the park in the short and medium term, but with reduced road widths and shared surfaces, with clear pedestrian priority.

“Future servicing or parking entries are not to be located on Mortimer La or William St, adjacent to the park, or where active street frontages are proposed.” Built form design principles for buildings surrounding the park have also been defi ned in the report, including a proposal for slender east-west tower forms aligned to protect view corridors to the Rumbalara ridgeline, and slender, set back north-south orientated tower forms to allow shadows to move quickly across Kibble Park. The report also speaks about the importance of Mann St. “Mann St is a fundamental part of the structure of Gosford. “It is the primary spine that connects different areas of the city along its length. “It provides a clear wayfi nding and organisational line to the city. “As a high street, it offers a historically important civic quality to the city. “It has a fi ne grain streetscape that is human scale, offering diversity of shopfronts and refl ecting the city’s history as a regional centre.”