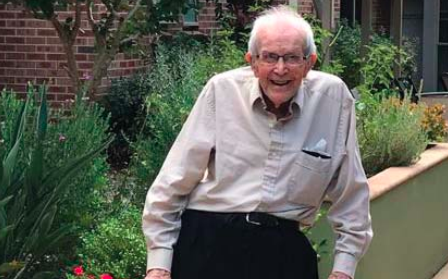 Mr Lloyd was born in the Mount Alma Hospital in Charters Towers on April 14, 1914, and grew up on “Eurunga” station in far north Queensland. After serving as a Land Ranger in Queensland and with the AIF at Oro Bay, Papua, during World War 2, he became a Land Valuer with the Commonwealth Public Service.

He was promoted to managerial positions in three states and completed his public service as Chairman of the Valuation Boards in Sydney. Since his retirement in 1979, he has self-published a book, The Weeks Royalty, an account of the discovery of oil in the Bass Strait by a US geologist, Mr Everton Weeks. He became a resident of Brentwood Village, Kincumber, in 1986, and left his Villa there after 32 years, to move into Chamberlain Gardens.

Mr Lloyd has one son, Jack, two step-children, Max and Lyn, as well as nine grandchildren and step grandchildren, and more than ten great grandchildren. Speaking about himself, he says that the greatest gift in life is the “love of a woman”. He speaks affectionately about his own experience and interactions.