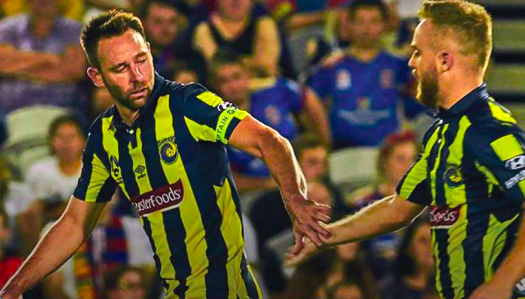 A challenge from new Head Coach, Mr Mike Mulvey, for players to step up and prove they wanted to be Central Coast Mariners in their final game of the season against Newcastle Jets, has fallen on deaf ears.

The Mariners were flogged in front of a loyal home crowd at Central Coast Stadium on Saturday, April 14, and Mr Mulvey’s presence in the stands did not result in the outstanding performances fans hoped for. “The most important thing is that I was able to get here before the season has finished to have a look at our team in action in a competitive game,” Mr Mulvey said. “It’s a local derby with pride on the line. “There’s a new coach in the house so let’s see what the players have got to offer on Saturday,” Mulvey said. The Mariners were not only playing for pride, a surprise win by Wellington Phoenix over Melbourne City (2- 1), meant the Mariners needed at least a draw to avoid coming last in the 2017-18 A-League.

Instead, they crumbled to one of their biggest ever defeats, losing to Newcastle Jets by six goals, the final score, Central Coast Mariners 2 Newcastle Jets 8. “We’re hurting as much as the fans are,” said Acting Coach, Mr Wayne O’Sullivan, at the conclusion of the match. “I’m an inaugural Mariner, so no one hurts more than me, cut me and I bleed Yellow and Blue,” he said. “No one wants to sit here on the end of an 8-2 loss, no one wants to hear a statistic like that. “We want to say we’re sorry. “We will put it right, Mike Mulvey has come in and made some statements about where he wants the club to go, we’re all right behind that. “We want to get back to a winning culture, we want to get back to winning things again here on the Central Coast and making people proud. “I’ve been here when there have been 18,000 people, I know what that feels like, and I know there are plenty of people who want to get on board with that, so let’s move forward and get that right. “It was very disappointing, particularly given the nature of the result, it really hurts. “It’s disappointing after three excellent performances and close games “To finish like that was very disheartening.

“We changed shape towards the back end of the fi rst half, and we got a little bit of joy from that, so we were hoping that we could try and, you know they play quite a direct style of play and we didn’t deal with it in the fi rst 25 minutes, so we thought we’ll close the line a little bit and make sure we deal with it better, but we didn’t do that with the fourth goal “The mood in the dressing room at half time was positive because we did fi nish very strong and it was very much around pride for the shirt, pride for the club, pride for the community, pride for all the things that were on the line in addition to making sure we didn’t end up on the bottom of the table, and part of that was for Josh as well, and it really hurt for Josh, the result, and for the club. “After we conceded the fourth one it was an open game. “The last three weeks, the boys have been amazing, given the circumstances, they’ve fought in every game, that was the mandate of the last four weeks. “Even tonight, under really difficult circumstances, they never stopped, we just didn’t get it right tonight.

“Even coming into the game, we were under no illusions of the quality that Newcastle have, if they get those combinations correct, and tonight they made some changes back to what was more reflective of the joy that they had earlier in the year. “They’ve got strength, power, speed, and a way of playing that works really well for them, and they’re hard to deal with,” Mr O’Sullivan said. Saturday night’s showdown against the Newcastle Jets gave Central Coast fans a chance to farewell Mariners legend, Josh Rose, despite a disappointing final score. The opening minutes saw high-energy and chances for both sides, Liam Rose and Riley McGree, each sending a shot from distance just over the crossbar, but it would be the Newcastle Jets that opened up the scoring. In the 10th minute, Joey Champness sent the ball past Ben Kennedy and into the bottom corner from close range. O’Donovan struck in the 21st minute, the ex-Mariner making no mistake in front of goal, and McGree found the back of the net only three minutes later, sending the Newcastle Jets ahead 3-0.

However, the Central Coast was unwilling to give up, and the Yellow and Navy pushed to reclaim possession. Connor Pain put his pace to good use in the front third, putting pressure on a hastily retreating Newcastle Jets defence, making a brilliant run that was only narrowly called for offside. Pain’s persistence soon paid off, after a ball across the box from, Andrew Hoole, found him in a perfect position to send it home and reclaim a goal for the Mariners. A goal reignited a spark in the Central Coast attack and mounting pressure from the home side had Newcastle on the back foot. A header from, Alan Baro, another long-distance effort from, Liam Rose, and a stoppage-time header from, Blake Powell, had the Jets keeper, Jack Duncan, scrambling to protect his goal, but the Yellow and Navy couldn’t quite capitalise on their chances and went to the sheds at halftime 3-1 down.

When the two teams returned to the pitch, the Central Coast gave a strong first showing in the second half, but it was the visitors who found joy in the final 45. McGree bagged a hattrick, and goals from, Lachlan Jackson, Dimi Petratos and a penalty to, O’Donovan, made it eight for the visitors. A dangerous header from Bingham ricocheted from the woodwork, and Buhagiar put away a consolation goal for the Central Coast. The most important moment of the match came in the 72nd minute, when Central Coast fans had the opportunity to farewell, Josh Rose. Central Coast Stadium gave a standing ovation to a legendary member of the Mariners Family, to say thank you for an outstanding career. A host of Mariners fans stayed after full time to wish him farewell.