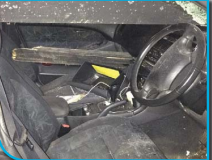 The Central Coast Rescue Squad assisted a lucky driver who narrowly avoided being impaled, in Yarramalong, in the early hours of April 8.

Rescue crews and emergency services were called to the scene of the accident on Yarramalong Rd, just before 1am, where they found the vehicle had left the roadway and collided into a fence, after trying to avoid an animal on the road.

Some of the fence palings had pierced through the windscreen, engine block and firewall, and into the driver and passenger compartment of the vehicle. Miraculously the driver escaped with no injuries.