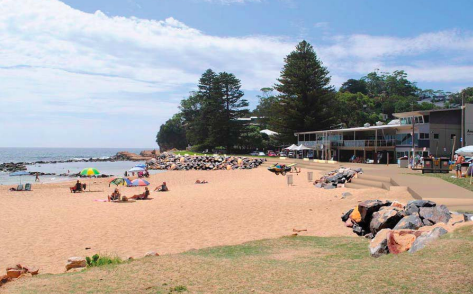 The works, funded by the NSW State Government, as part of the Stronger Communities Funding, made available to all newly-merged Councils, will improve the infrastructure and amenity of the area, as well as deliver important coastal protection and rehabilitation works to stabilise the foreshore. Council Director, Assets, Infrastructure and Business, Mr Mike Dowling, said that the upgrades will provide the community and visitors with a safer and more accessible foreshore, and will take place in two stages. “Stage one of the works will include building a new and more substantial rock wall next to the rock pool, to stabilise the foreshore and prevent further erosion, move the drainage outlet to the eastern end of the rock pool, renew the existing walkway between the surf club and eastern rock shelf, and general landscaping,” Mr Dowling said. “Stage two will include rebuilding the small rock wall and a new larger ramp near the surf club, upgrading the beachfront walkway, and additional landscaping,” he said.

A drop-in Information Session will be held for the community to find out about the redevelopments and to gain an understanding of the timelines and the works involved. This session will be held on Thursday, April 5, at Avoca Beach Surf Life Saving Club, between 4:00pm and 8:00pm. Mayor Jane Smith said the project was one rated as a high priority by the community when asked to vote on these projects in late 2016 and will increase the safety and amenity of the foreshore area. “Stronger Communities Funding is a great example of how Council can work together with the NSW State Government to deliver great outcomes for the community,”

Mayor Smith said. “Once all stages are complete, the foreshore improvement works will deliver much needed practical improvements to the area including foreshore stabilisation, a renewed walkway, stepped seating, disability access and mobility ramp,” she said. Council will work with the contractors to minimise the impacts the works will have on foreshore users and has scheduled major work to avoid the peak holiday season from November to February. Planning is also underway to upgrade the drainage system in Avoca Bowl and works will take place in stages over the next five years, subject to Council’s yearly capital works budgets.

Council election needs to be held before September 2017 – Primrose