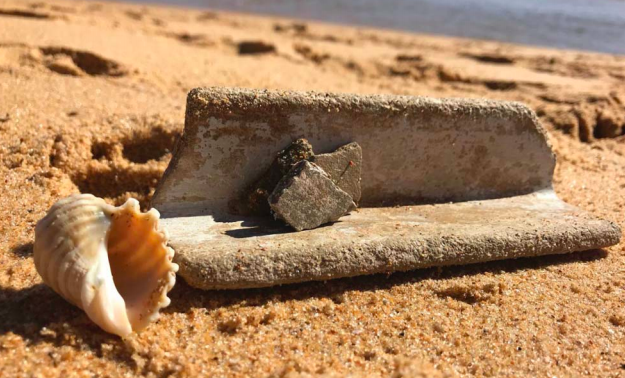 Significant amounts of material, believed to contain asbestos fibre, have been found on both Wamberal and Terrigal Beach since Friday, April 13, causing community alarm, and calls for action from all three levels of government.

Central Coast Councillors called for a Management Plan to be developed and reported to the May 14 Council meeting, on how the asbestos issue at Wamberal and Terrigal Beaches will be resolved in the interest of public safety. Mayor Jane Smith said there was genuine concern in the community about the potential presence of asbestos containing material at Wamberal and Terrigal Beaches, and that Council needed to take decisive action to resolve it. “I commend the staff, and particularly Acting CEO, Mr Brian Glendenning, for their swift action in removing asbestos from these beaches and securing the beach for the safety of beachgoers,” Mayor Smith said. “Council has certainly been proactive in the short-term, but the focus now needs to be on coming up with a long-term strategy that will satisfy beachgoers, local landowners and the community.

“We are committed to continuing working with the State Government, particularly the Environment Protection Authority (EPA), to resolving this issue in the best interests of our community.” Council staff are currently conducting at least twice weekly inspections of Wamberal and Terrigal Beaches. Council has reminded residents to report any material potentially containing asbestos at either beach to the Environment Protection Authority or Council straight away and not remove the material themselves. The Council also requested that the Acting CEO publish an information sheet concerning the potential risks associated with contact with the asbestos material, and distribute that information sheet to residents that live next to Wamberal and Terrigal Beaches. 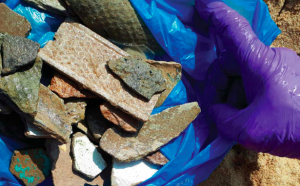 Mayor Smith said the source of the material being found on the beaches was unknown at this stage. “It could be a historical issue, so the source is difficult to identify,” she said. Fencing and advisory signs have been placed at Wamberal, between the public beach and affected private land. Federal Member for Robertson, Ms Lucy Wicks, said she had written to Central Coast Council requesting an urgent briefing following community concerns about asbestos being discovered at Terrigal Beach over the weekend of April 20 and 21. Ms Wicks said it was the second beach to be exposed to potential asbestos contamination in just a few days, following the removal of a small amount of asbestos from Wamberal Beach by Central Coast Council on April 14. “While on surf patrol at Terrigal Beach over the weekend, I was deeply concerned to see material that appeared to contain asbestos that had washed up on the shore,” Ms Wicks said.

“I would like to thank Central Coast Council, and in particular Council CEO, Mr Brian Glendenning, who responded promptly and sent trained Central Coast Council staff to inspect Terrigal Beach and ensured that the asbestos was appropriately examined and removed from the area. “But my concern is that with so many children and families at Terrigal Beach, and given that it is currently school holidays, it becomes all the more important that this issue is properly investigated and monitored. “I look forward to working with Central Coast Council, the NSW Government and the community to make sure that our beaches are safe for families and children across the Central Coast.”

Mr Anthony Horwood and Ms Petra Horwood alerted Council, ABC Central Coast and Coast Community News to the most recent asbestos finds on Terrigal Beach. “We collected a quantity of broken roof fibro off Terrigal Beach on Saturday, April 21,” Mr Horwood said. “I did not count exactly the contents, but estimate that there were between 25 to 30 pieces, which I collected between the Terrigal Lagoon and the rock pool at the southern end of Terrigal Beach,” he said. “The highest concentration of fibro fragments (up to the size of an adult open hand) was directly in front of the Terrigal Surf Life Saving Club building, in fact, within four metres of the surf lifesavers’ shelter on the beach. “I intend to give the material to the Central Coast Council Mayor and ask Council to have the material assessed.

“I will be asking Council to release the results of that assessment to the community as soon as it is known.” Another 15 pieces of fibro were collected by another person on Sunday, April 22, within the same area that the Horwoods collected from. Mr Horwood said he logged an incident report with the EPA. Ms Petra Horwood said the couple found another 39 pieces between the flags and the rock pool on Thursday, April 26.

“The EPA confirmed they consisted of ‘Super 6’ type white asbestos,” she said. “Some were above the High Tide Mark and dry. “We left them tripple bagged and inside an asbestos bag with the Council’s lifeguards. “We both have some experience with identifying fibro containing asbestos and we were quite certain that what we found at that time was, in fact, asbestos fibro. “We realise that these samples would have to be professionally tested to verify that they contain asbestos. “We are aware that asbestos is less dangerous when wet, but broken off, dried-up pieces may release asbestos fibres.

“One fibre alone entering the lungs may cause Mesothelioma. “My husband’s mother died of Mesothelioma in June 2017. “How easy would it be to accidentally collect one fibre of asbestos from the beach due to this material’s presence and inhale it? “It may stick to a child’s hand or face. “It could be picked up by a child’s shovel after digging ‘trenches’ or building sand castles. “It may stick to feet or thongs when walking on the beach or collect on the bottom of your beach bag or towel. “When you hang up your towel at home to dry, that fibre could then be inhaled. “We did not check the beach above the Mean High Tide mark which may contain dry bits of fibro.

“Asbestos fibro is much more dangerous when it is dry as loose fibres can be blown about by the wind. “There is no such thing as a ‘safe’ level of exposure to asbestos. “Any asbestos on or at Terrigal Beach has to be removed. “We understand that the source of this material has most likely come from an old asbestos dump site (1974/75 era) on Wamberal Beach that was impacted by a major storm in 2016, and then carried by the current to Terrigal Beach.

“It should be of grave concern to the community that this material has suddenly started to wash up on Terrigal Beach. “Do we want our local community, our swimmers and paddlers, surfers, our children, our lifeguards, and our visitors to be potentially exposed to this dreadful material? “The community will only have confidence in its elected representatives if a permanent solution is found for this problem, rather than ‘band-aid treatments’ such as covering the dump site on Wamberal Beach with more sand, which will only be washed out on to the beaches at the next major storm.” Mr Adam Crouch issued a statement after the latest asbestos finds on Terrigal Beach: “I was extremely concerned when informed that last weekend, asbestos fragments were found on Terrigal Beach.

“I welcome Council’s move in finally taking a proactive approach to the asbestos management,” he said. A week earlier, on April 13, Clr Jilly Pilon had informed the Member for Terrigal, Mr Adam Crouch, of a potential asbestos contamination issue at Wamberal Beach, which could extend down the beach to the Terrigal Lagoon. “I immediately notified the Environment Minister, Ms Gabrielle Upton, who has subsequently brought these urgent concerns to the attention of senior officials at the NSW Environment Protection Authority (EPA),” Mr Crouch said.

“I have also spoken to Mayor Jane Smith and requested Council close Wamberal Beach, as a precautionary measure, until the extent of this hazard and any potential contamination is determined, given that management of the beach is a responsibility of local government. “The State Liberal Government stands ready to offer assistance and support to Council, as public safety is of paramount importance.” The following day, Mr Crouch released another statement. “I have been informed that early on Saturday morning, Council staff attended Wamberal Beach to conduct an inspection and remove two pieces of asbestos.

“Following Council’s inspection of the beach, officers from the Environment Protection Agency (EPA) inspected Wamberal Beach and found many additional pieces of suspected asbestos. “EPA officers contacted Council and requested that Council staff urgently attend the site to remove all waste. “EPA has also confirmed that the asbestos present at Wamberal Beach is not a result of recent dumping. “It is due to a legacy of poor waste management in this beachfront area,” Mr Crouch said.