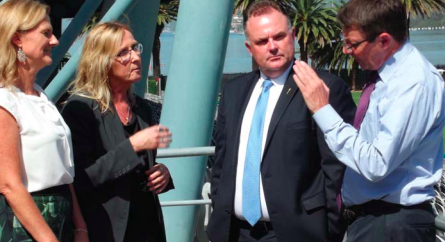 “The project will involve upgrading the existing amenities block to a fi rst class standard,” Mr MacDonald said. “Works include a full overhaul of the existing amenities including ceiling rectification, installation of new light fittings, hand dryers, tapware and plumbing. “Central Coast Stadium regularly hosts a range of sporting matches and music events, so I’m really pleased that funding from the State Government is going towards improving this facility,” Member for Terrigal, Mr Adam Crouch, said. “This is one of several projects receiving funding through Round 1 of the Stronger Country Communities Fund,” Mr MacDonald said. Central Coast Mayor, Ms Jane Smith, applauded the announcement, saying that the Stronger Country Communities Funding was illustrative of the State Government’s support for the development of infrastructure in regional communities.

“We’re tremendously proud of Central Coast Stadium and the quality events and programs it continues to deliver to our community,” Mayor Smith said. “This funding will be used toward improving amenities and infrastructure that will augment the visitor experience and cement the Stadium’s reputation as the Coast’s premier sporting venue”, Mayor Smith said. “As a West Ward Councillor, I am excited to learn that the NSW Liberal Government is investing in our world-class stadium,” Central Coast Councillor, Mr Troy Marquart said. “This further investment will ensure the facilities within our asset portfolio continue to grow and improve, which will create an even stronger draw card to attract major events to our region”. “The upgrade to the existing amenities would improve both the appeal and functionality of the stadium, appealing to a wider section of the community and putting the stadium on a more even footing to attract a greater variety of sporting and cultural events to the Central Coast.”