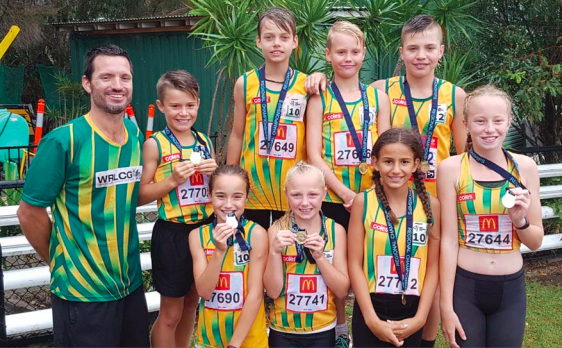 The Wyong Junior Relay Teams are heading to the State championships

Wyong Athletics Centre junior relay teams have both qualified for the State Championships, after an excellent showing at Mingara.

The junior boys and girls teams competed in the Region 2, Little Athletics Championships, in February, along with various other athletes from the Centre. Mr Brendan Carlson, Wyong Athletic Centre President, refl ected on the results. “It was a three-day competition, involving a wide range of track and field events. “Our club had 58 athletes compete, with some fantastic individual performances.

“Overall we won 42 medals, and have 19 individual athletes, aged between 9 and 14, that qualified for State,” he said. A standout performance on the day was 11-year-old Jai Callaghan, who broke a regional 400m sprint record. “The most significant achievement was that of our junior relay teams, who became the first Wyong teams to ever qualify for the state final,” Mr Carlson said. Mr Carlson explained the technicalities of the relay event and said the success ultimately boiled down to the determination and hard work of the eight junior athletes.

“A relay involves a circular 400m track with four runners, who each run a 100m leg, with a baton. “To form a junior team, you must have four members, with one member from each junior age group, 9, 10, 11 and 12 years. “Our teams have been training Tuesdays and Thursdays since October. “They are a dedicated bunch who all really love athletics. “The relay involved some of the biggest clubs in the region and was run in the rain on a slippery track. “The Wyong kids are by no means the fastest individually, but their dedication to training and being able to exchange the baton between runners at full speed, gave them the edge on their competitors, and the win in both races,” Mr Carlson said.

Wyong’s junior boys relay team consist s of Dillon Coyte, Jai Callaghan, Caleb Dunstan and Zac Barton. Ava-Marie Carlson, Mia Cross, Abbie Eagleton and Demi Karipidis make up the junior girls’ team. February also marked the Wyong Athletic Centre’s 40th anniversary. “Being our 40th season, we did have a photo night with a cake and club barbecue earlier in the season. “We have 247 members aged from 3 years old to 67 years old. “We have a proud history of providing a fun and inclusive environment for the community to participate in athletics. “We have comp nights every Thursday between October and March, and all members have the opportunity to train for free on Tuesdays with our five dedicated coaches,” Mr Carlson concluded.