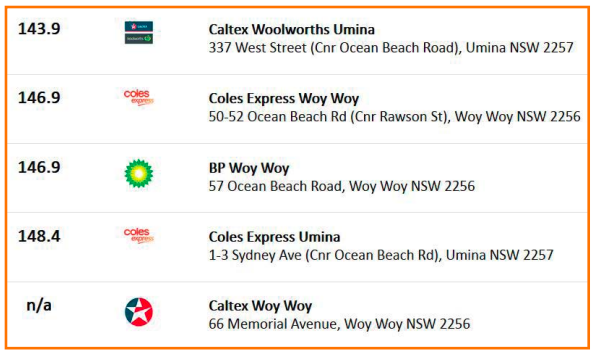 Spiralling Peninsula fuel prices have prompted action by our local Members of Parliament.

Both the Federal Liberal Member for Robertson Ms Lucy Wicks and the State Labor Member for Gosford Ms Liesl Tesch, who represent the Peninsula, have started petitions and have made contact with the Australian Competition and Consumer Commission. Ms Tesch has sought an inquiry into petrol pricing and has encouraged locals to boycott high priced Peninsula service stations. “I’ve written to the ACCC to ask for a proper investigation of collusion in petrol pricing on the Coast and the Peninsula.”

Ms Tesch said she intended to gather signatures for a petition which she would present to the NSW parliament to push for an inquiry. Peninsula petrol stations have recently been charging as much as 14 cents per litre more than stations in the Gosford area and up to 32 cents per litre more than the cheapest petrol on the Central Coast. “I live on the Peninsula and I support local business owners but I hope a bit of consumer pressure will make local petrol station operators realise they have to bring their prices down to compete for our business,” she said. Ms Tesch said petrol prices had hit a two-year high, and recent studies had shown that Peninsula motorists were getting hit hardest on the Central Coast.

“It shouldn’t be the case that petrol costs many cents more per litre in Woy Woy than it does in West Gosford. That’s absurd. Nor should locals have to travel off the Peninsula just to get a fairer deal,” Ms Tesch said. Ms Wicks also has a Robertson petrol price petition on surveymonkey.com. Ms Wicks said she would be passing all comments on to the ACCC. “Some of the comments my office has received recently include ‘Peninsula people are paying way too much for petrol… it needs to reduced or controlled by ACCC …it’s out of control’,” Ms Wicks said. “I would love to see the petrol price come down, especially on the Peninsula, often petrol is 10 cents cheaper in Kincumber and Terrigal than in Ettalong and Umina,” another comment said.

Ms Wicks said: “Since the petition started, we’ve received over 1000 responses.” Ms Tesch has blamed “Big Oil” for the high prices and not “our local stores”. “They know there is a trapped market on the Peninsula because it has an elderly population on restricted licences so they have to pay the inflated prices,” she said. Ms Tesch said that even a saving of $8 on a full tank of petrol could be the equivalent of a meal for some Peninsula households and she believed that is why the issue was of such importance to many residents.

She said that shopping around for petrol was difficult with limited options available to Peninsula residents, but it could make a difference. “The community can see that they are being taken for a ride by Big Oil, and it’s time it stopped.” “It’s about sending a message to companies like Shell, BP, and Caltex that just because we are a peninsula doesn’t mean we can be treated like second-class citizens and charged more than other areas. “We believe there may be price collusion involved here and even some evidence that the major players, Coles and Woolworths are using price comparison apps to collude on prices and push prices up in some area,” she said.