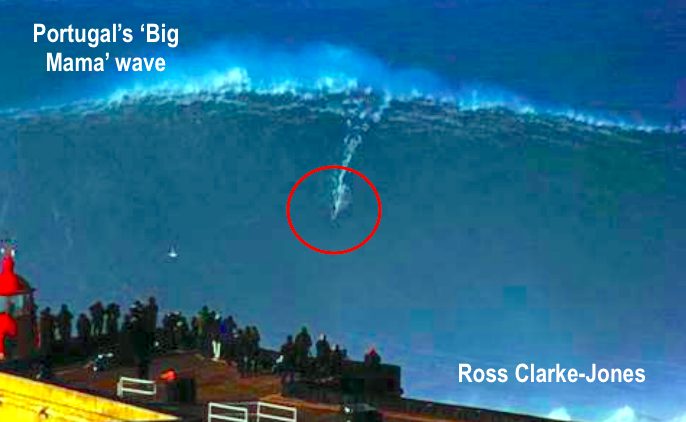 Terrigal’s big wave royalty, Ross Clarke-Jones is riding harder, faster, and higher in 2018, having recently smashed his personal big wave (and World) record by taking on the ‘Big Mama’ at Portugal’s Nazare.

With his fearless and inimitable style, Clarke-Jones remains the only surfer in the world to ride right over on ‘Big Mama’, an awe-inspiring wave peak considered to be one of the most dangerous on the planet, and the one closest to the lighthouse at Nazare that dominates iconic images around the world. Almost 20 years to the day, Clarke-Jones rode the largest swells in history outside Log Cabins, on the North Shore of Oahu, Hawaii, known as ‘Biggest Wednesday’ (Wednesday, January 28, 1998). “That was my first Big Wednesday, so to do it all again on an even bigger wave was a massive thrill,” said Clarke-Jones.

“And who knows, what’s to come for the rest of the season.” Despite all of Clarke-Jones’ achievements, he has always been true to himself with a down to earth rawness. When he mastered the freak 130ft titan wave in Nazare, the biggest ever ridden at the extreme wave mecca, with tow partner, Benjamin Sanchis (Hossegor, France) in January, in typical Clarke-Jones style, the massive feat was taken in his stride and with little fanfare. The enigmatic big wave legend preferred to let the historic ride speak for itself. With the new Personal Best ride under his belt and thousands of kilometres already travelled this year chasing big waves in Hawaii, California and Portugal, there are no signs of the legendary surfer slowing down. “When I hit 50, a lot of people said that I’d start to worry about my mortality and that the fear would finally get to me.

“More than 12 months on, I love proving them all wrong and pushing myself to up the ante and go bigger each time,” added Clarke-Jones. “I am, however, looking forward to heading back closer to home when I’ll be chasing big waves in the Southern Hemisphere for the next few months,” he said.

The XXL Big Wave award competition period draws to a close in March, and while he already has two epic entries in Ride of the Year and 10 entries into XXL Biggest Wave, Clarke-Jones is ready to put his body on the line to score an even bigger ride with big surf forecast in Nazare over the next few weeks. In a fearless category, all of their own, Clarke-Jones and his big wave peers regularly take on waves that are higher than 80 feet and have the force of a freight train. Born in Sydney, Clarke-Jones grew up in Terrigal and now splits his time between homes in Victoria’s Torquay, Nazare Portugal and Hawaii.

No luck for our surfers in Portugal