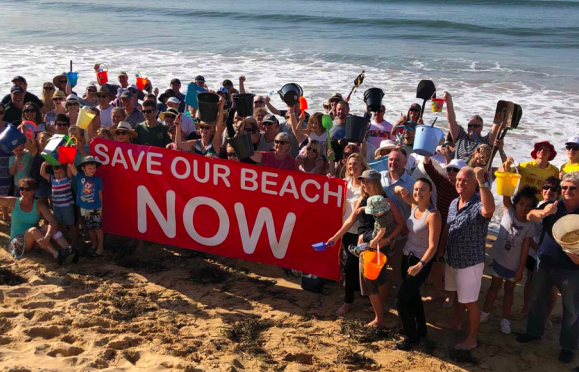 More than 60 local residents have attended a Save Our Beach protest on March 17 convened by Peninsula Chamber of Commerce, Liberal Member for Terrigal Mr Adam Crouch, and Liberal councillors Cr Jilly Pilon and Cr Gale Collins.

Mr Crouch said the protest sent a clear message to Council that the community demands action. Mr Crouch and the councillors repeated their call for Central Coast Council to take responsibility for the situation at Ettalong Channel. He said that Council has avoided responsibility and delayed any progress on this issue for far too long. “I call on the Labor and independent alliance of councillors to stop obfuscating and avoiding this issue, and start to work together to achieve a positive outcome,” Mr Crouch said.

“Last week I met with Minister Toole and asked him to write directly to Council to remind them of their legislative responsibility to dredge and maintain Ettalong Channel, and I can confirm that Minister Toole’s letter has been sent to Council. “Wherever possible, the NSW Government continues to engage with Council to reach a solution.” “The NSW Government stands ready to assist Council in helping fund an ongoing solution.

“Since 2011, funding has been available through the Rescuing Our Waterways program, which consists of a co-fund arrangement between local Councils and the State,” Mr Crouch said. Cr Pilon said that the need for dredging to prevent silting in the Ettalong Channel was not a new problem. “Council have known for years that dredging is required in the Ettalong Channel. “Indeed, as far back as 2009, a management study was written by an independent engineering consultancy and provided to council with options to fix this ongoing problem,” Cr Pilon said.

“I have raised this issue with my council colleagues on multiple occasions already, and I will continue to advocate for our community at every possible opportunity.” Cr Gale Collins said that the current state of the Ettalong Channel was having a significant impact upon the local community. “As a local resident, I’m disappointed that my council colleagues did not support the dredging motion,” Cr Gale Collins said. “The silting in Ettalong Chanel is creating a safety issue and impacting our ferry operators, tourist passengers, student and work commuters, recreational boat users and our local businesses.

“I would urge council to submit an application for the Rescuing Our Waterways program when it opens next month, and I call on my council colleagues to work constructively towards an outcome,” Cr Gale Collins said. Chamber president Mr Matthew Wales said: “It was fantastic to see such a great crowd turn out in protest over Central Coast Council’s inaction over the Ettalong Channel dredging and renourishment of Ocean Beach. “Everyone came down with their buckets and spades in a symbolic gesture to let Council know that the community is fed up with state of our local beach and the silting of the Ettalong channel,” he said.

“We were also encouraged to see support from our local councillors Rebecca Gale-Collins and Greg Best who stood by the community at the recent council meeting. “It seems that the council is determined to push the blame and responsibility onto the NSW Government even though the Government has repeatedly told the council that under the legislation, the council is responsible. “The council also tells us that there are no funds in their budget for the dredging and renourishment works although the recent council financials show that income exceeds expenditure by $156 million. “That’s a lot of extra cash that should be spent on roads, drainage, community facilities and the dredging works.”

What to do with Covid fines?

All invited to participate in International Women’s Day march