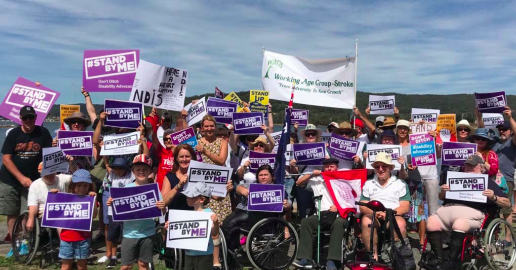 Member for Gosford and seven-time Australian Paralympian, Ms Liesl Tesch, led a Stand By Me protest march along the Gosford waterfront on Saturday, February 24, calling on the NSW Government to continue disability advocacy funding beyond July 2018.

People with disability from across the Coast, and representatives from local organisations like Fairhaven, and from around the state, including the Physical Disability Council of NSW, rallied alongside the Labor MP seeking the continuation of state funding for services. Currently the NSW Government funds approximately 50 disability advocacy, information and peak representational organisations, services not covered by the NDIS, at a cost of around $13m per year, Ms Tesch said.

“Our NSW Advocacy organisations hold a wealth of knowledge, have strong relationships with community members, and are the first point of call for people with disabilities when they need additional support. “We have a long way to go to achieve full inclusion in Australia, and disability advocacy organisations are the vehicle to help create an accessible and inclusive society. “Cutting advocacy funding will make it harder for local people with disability to live full and equal lives in our community, and that is just not acceptable.” The NDIS does not cover all services for people with disability and Ms Tesch said the need on the Central Coast was clear. “Losing advocacy services like the NSW Council for Intellectual Disability will mean that people with disability will have fewer allies in their corner fighting for inclusive transport, education and employment,” Ms Tesch said. NSW Labor committed to providing funding for disability advocacy following the NSW Disability Advocacy Alliance Parliamentary Roundtable at State Parliament in August. “Disability advocacy groups need certainty so they can continue their important work.

“Labor’s committed to continuing their funding and so should the Berejiklian-Barilaro Government,” Ms Tesch said. “State-run services need state funding, so why doesn’t the NSW Government say they will continue the funding for disability advocacy beyond July this year?” “The Federal Government last month announced $60m in funding until 2020, but stressed that a national system “requires ongoing investment from states and territories” for their own state-run services and state-based planning”. According to Mr Michael Fine, who attended the march, the Central Coast will be one of the hardest hit areas from the cut, and he estimates that up to 50 NSW advocacy groups would be wiped out as a result.

“NDIS funding covers service providers, not advocates or basic community support services. “This means that a core piece of disability support infrastructure is about to disappear. “This will leave significant gaps in advocacy, information and representational services for the 20 percent of people living in NSW with a disability, the largest single minority group in NSW, and some of its most vulnerable citizens,” Mr Fine said. “Some groups set to disappear after the cut include the 60 year old NSW Council for Intellectual Disability. “Another is the Central Coast Disability Network, which provides vital services not covered by the controversial NDIS,” he added. According to Mr Fine, a letter by the NSW Ombudsman, Mr Michael Barnes, outlines the groups’ key role in raising and facilitating investigations into growing reports of predatory crime against disabled people. “Community advocates play a key role in raising concerns about suspected abuse, neglect and exploitation of individuals,” an unpublished letter, co-signed by Mr Barnes and Deputy Ombudsman, Mr Steve Kinmond, reads. “In our current work in receiving and responding to allegations of abuse, neglect and exploitation … we regularly exchange information with NGOs.

“There is a vital continuing role for community advocates who work with and support people with disability,” the letter reads. Mr Fine said Queensland’s Labor Government has guaranteed a minimum of $4m in ongoing advocacy funding after the national scheme begins, and NSW Labor says it would ensure the funding continues if elected. The Ombudsman’s remarks were contained in an unpublished submission to the NSW Law Reform Commission’s review of the Guardianship Act. According to Mr Fine. the Ombudsman received nearly 1,750 reportable allegations of incidents in schools, churches and childcare centres in NSW last financial year. Allegations of sexual assault, physical assault and neglect make up the bulk of reportable incident notices.

“Last year’s allegations tally represented an increase in the number of formal complaints received of about 30 percent on the previous year, and 75 percent for all complaint categories over the past five years, according to its recent annual report. “Nearly half of all reportable incidents are referred by the Ombudsman to the police, and about 20 percent of reportable incidents result in criminal investigations, a conversion rate the Ombudsman has said reflects the difficulty of pursuing criminal investigations where victims and key witnesses are disabled people,” Mr Fine said. A spokeswoman for Disabilities Minister, Mr Ray Williams, said: “The NSW Government is currently working with the Commonwealth on a new national approach to quality and safeguarding for the NDIS, overseen by a new national regulator.”