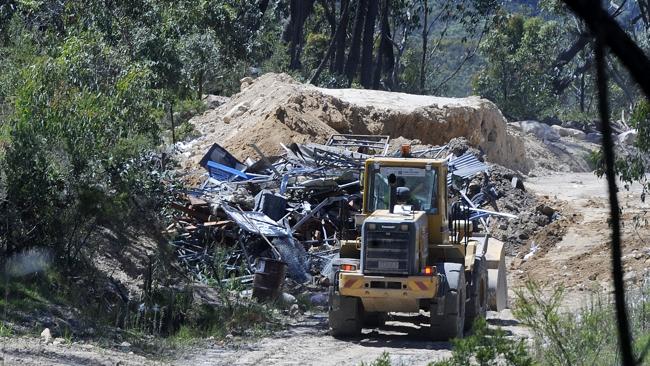 The NSW Parliamentary Inquiry into Waste and Waste from Energy has recommended that the NSW Government establish an independent inquiry into the operation, regulation and approvals of the Mangrove Mountain Landfill site.

“The recommendation by the NSW Upper House Parliamentary Inquiry into the waste industry, for an independent inquiry into Mangrove Mountain Landfill, is a major step in the right direction and what we had hoped for,” Dr Stephen Goodwin said. “Mountain Districts Association prepared a written submission for and made a presentation to the Parliamentary Committee seeking such an Inquiry,” he said. “It fills us with hope that we may yet see justice done on this longstanding issue”.

“Only an open inquiry, independent of government interference, can hope to uncover all of the facts and get to the bottom of how this massive environmental and public health disaster was allowed to happen. “Central Coast residents are fully aware of the potential threat posed by Mangrove Mountain Landfill on the health of their drinking water supply, and to the safety of the groundwater that is widely used by rural residents, farmers and businesses in the Mountain Districts. 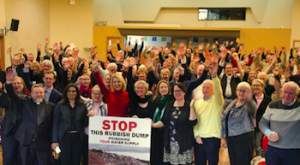 “They need reassurance that this will be fully investigated and not be allowed to continue. “What the community needs now is for Central Coast Council to throw its support behind the implementation of this recommendation, and demand that the Inquiry takes place. “The recommendation for an independent inquiry must be implemented by the NSW Government at the earliest opportunity.

“This is an election year, and Mountain Districts Association will make sure that it becomes a prominent election issue on the Central Coast. “If the Government does not act, I am sure that they will be under enormous pressure to hang on to the Liberal-held seat of Terrigal. “The threat to the Central Coast drinking water supply and groundwater reserves crosses political boundaries.

“Mountain Districts Association congratulates the cross-party parliamentary committee on this far-sighted recommendation.” Local Central Coast Member of the NSW Legislative Council, Mr Taylor Martin, who is a Liberal member of the Legislative Council’s Planning and Environment Committee which has released the report said he agreed that there should be an independent inquiry to investigate the Mangrove Mountain Landfill site.

“I am particularly pleased that this cross-party committee has recommended an independent inquiry into the approval, the operation and the regulatory compliance of the Mangrove Mountain site,” Mr Martin said. “Furthermore, I’d like to see the implementation of GPS vehicle tracking devices for waste disposal trucks used by licensed providers in NSW to ensure waste is going to appropriate sites and in the approved quantities,” Mr Martin said.

Mr Martin also said that the Report recommended the use of GPS vehicle trackers and other surveillance techniques, including drones, to prevent illegal dumping and that the NSW Government allocate additional resources to support the enhanced use of vehicle trackers in the waste industry. “If tracking devices had been used in years gone by, it would have flagged authorities to the dumping at Spencer much earlier,” Mr Martin said. The Mangrove Mountain Landfill recommendation was number 27 in the Inquiry’s report, which said: The committee appreciates the concerns raised by the Mountain Districts Association about the Mangrove Mountain landfill site.

“It is understandable that the presence of a fully operational landfill site that sits on top of the Ourimbah Creek system is a matter of alarm for the local community, even though the site stopped receiving waste in 2014. “We also note that the NSW EPA, the NSW Department of Planning and Environment and independent consultants have determined that the site has not contaminated the water supply. “The committee recognises that the former Gosford Council was the consent authority for the initial site redevelopment.

“However, once the NSW EPA was given this responsibility, the agency should have conducted better stakeholder engagement prior to issuing and amending the environment protection licence. “We believe this may have gone some way to reassuring the local community about the safety of the project. “It is also disappointing to receive evidence that it can take weeks for NSW EPA officers to investigate complaints, given that during this time, crucial evidence may be lost.

“We strongly encourage the NSW EPA to take more prompt action to investigate potential breaches of environment protection licence conditions. “The committee believes that there are significant unresolved issues regarding the Mangrove Mountain landfill site, including licence variations and the role of the then Gosford Council in issuing development consent. “The committee, therefore, recommends that the NSW Government establish an independent inquiry to investigate the operation, regulation and approvals of the Mangrove Mountain Landfill site.

“In 2001, the NSW EPA issued the site with an environmental protection licence. “The licence has since been varied on at least 13 occasions, despite the Mountain Districts Association’s suggestion that the site conflicts with the requirements of the NSW EPA Environmental Guidelines: Solid Waste Landfills. “The site operated as a regional waste facility, licensed to accept general solid waste (non-putrescible) until May 2014.

“Verde Terra is currently refining plans to alter the site. “The site sits in the catchment of the Ourimbah Creek system which supplies water into Mardi Dam and Mangrove Creek Dam. “The local community is concerned that the landfill will contaminate the water supply of the Central Coast region. “The Mountain Districts Association said the NSW EPA has taken ‘zero’ action in response to compliance concerns regarding the site.

“The NSW EPA reported that the consultant concluded that there was no evidence of the landfill contaminating the water supply. However, the Mountain Districts Association contended that the NSW EPA has misconstrued the report’s findings. “The association also conducted its own groundwater investigation and said it had found ‘serious concerns’ about the data supplied by the operator and used in the consultant’s report. NSW Shadow Environment Minister, Ms Penny Sharpe, said “The Mangrove Mountain landfill site has been full of controversy for a very long time and it has been clear that an independent inquiry will be the only thing that will get to the bottom of what has taken place on the Mountain.

“I would urge the NSW Government to adopt this strong recommendation from this cross-party committee,” Ms Sharpe said. “It would be absolutely inappropriate for the EPA to move ahead with any new approvals or conditions at the landfill site until the inquiry was finalised,” she said. The NSW Greens Environmental Spokesperson, Dr Mehreen Faruqi, said: “There are still so many questions about significant unresolved issues regarding the Mangrove Mountain landfill site, including the operation, regulation and approvals of the facility, the role of the then Gosford City Council in issuing development consent, as well as the involvement of the Environmental Protection Authority and the Office of Water.

“I am pleased that the Committee has recommended that the NSW Government set up an independent inquiry into the operation, regulation and approvals of the Mangrove Mountain Landfill, which is something I have been pushing for in NSW Parliament. “The community are calling for a Special Commission of Inquiry and the Premier must listen to them.

“I put up a proposal for a parliamentary inquiry into the Mangrove Mountain landfill and I’ll be pushing for the NSW Government to act on this recommendation to get to the bottom of this once and for all. ”The community deserves no less.”