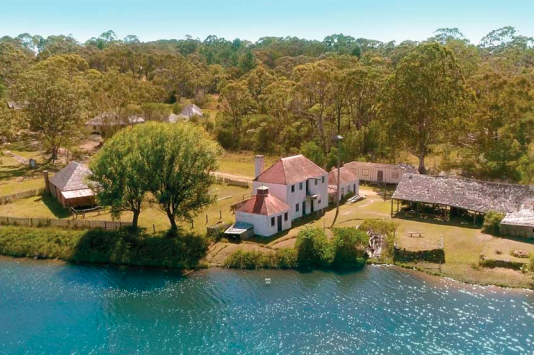 The Old Sydney Town site on part of the land. Image; supplied

The CBRE agent responsible for the sale of the property, Mr Peter Vines, said there had been a “huge amount of interest” in the land, which includes the former Old Sydney Town and the Australian Reptile Park, which has a long-term lease on their site. Interest in acquiring the site had been drawn primarily from Sydney and the Central Coast, and the Expression Of Interest (EOI) process is due to close on March 15. Mr Vines said it was difficult to estimate what the sale price would be. “It is really a guess because there is nothing quite like it that has been transacted,” Mr Vines said.

“It is a very large parcel of land in a unique location,” he said. Mr Vines said the Australian Reptile Park’s tenancy “on a very long lease until something like 2067”, added to the market value of the property. “It is a very good business and a very popular attraction,” he said. Mr Vines said potential buyers were keeping their cards close to their chest about their intentions for the future of the property. It is currently zoned E4 and, according to the Gosford Local Environmental Plan 2014, the objectives of the zone were: to provide for low-impact residential development in areas with special ecological, scientific or aesthetic values; to ensure that residential development does not have an adverse effect on those values; to promote ecologically, socially and economically sustainable development, and the need for, and value of, biodiversity in Gosford; to provide land for low-impact touristrelated development that is of a scale that is compatible with the special ecological, scientific or aesthetic values of the area; and, to ensure that development is compatible with the desired future character of the zone. Under the LEP, uses permitted without consent on the land were home occupations and recreation areas.

Uses permitted with consent include: animal boarding or training establishments; camping grounds; caravan parks; dwelling houses; ecotourist facilities; environmental protection works; extensive agriculture; home-based child care; home industries; pubs; recreation facilities (indoor and outdoor); registered clubs; restaurants or cafes; roads; secondary dwellings; signage; tourist and visitor accommodation; veterinary hospitals; and water storage facilities. Mr Vines said any proposal to rezone the land would be “highly speculative, as all rezoning is”. He said he believed that future owners would be sympathetic to the previous use of the land as the Old Sydney Town colonial theme park. “There is a huge spotlight on it as a property because of the huge nostalgia attached to it as the former Old Sydney Town,” he said. Although some of the Old Sydney Town buildings, such as the windmill, were well preserved, others are in very poor condition. “It would be very expensive to bring them back to the standard required for a theme park,” he said. The Member for Robertson, Ms Lucy Wicks, said she had received emails from members of the community seeking information about what could be done to conserve the site or re-open it as a cultural attraction. She said she would be more than happy to assist community groups wishing to tender petitions.