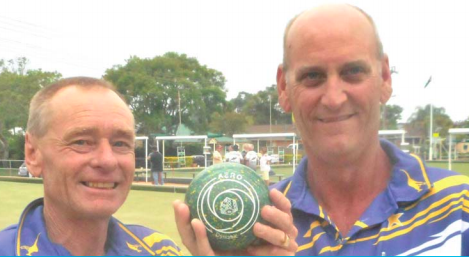 In a nail-biter of a final, Wyong’s, Stephen Elliott and Mark Wheatley, got up on an extra end to defeat Ettalong’s, Glen Daley and Nathan Malloy, in the final of the Bowls Central Coast Pairs Championship, played at Wyong Bowling Club on Sunday, March 4.

The Wyong pair trailed 11-17 after 16 ends, but finished strongly to square the score at 19 all, to force an extra end decider. An appreciative home spectator crowd were on the edge of their seats, as Stephen and Mark gained the upper hand to win their first Zone Pairs Championship. They will now contest the Bowls NSW State Championships, to be played at Ettalong BC, later in the year. In other championship games, The Entrance’s, Neil Williams and Richard Thornton, captured the Seniors Pairs title by just one shot, in a tense clash, defeating Avoca Beach’s, Keith Ferrier and Kevin Bowcock. Ourimbah RSL’s, Tony Aldrich and Steve Balsdon, proved too strong for Ettalong’s, Gary Eggleton and Mark Harrison, in the President’s Reserve Pairs, with a convincing 27-12 win.