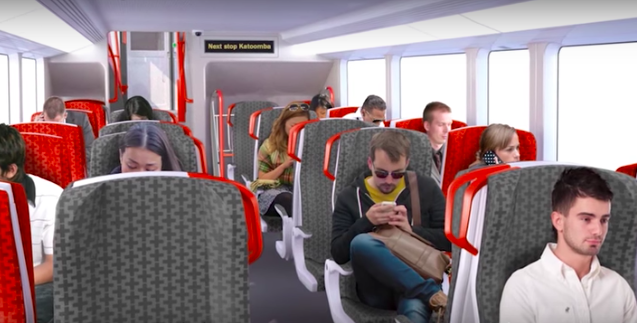 The new intercity fleet will have a fixed 2+2 seating plan. Image: Transport NSW

According to Member for Wyong and Shadow Minister for the Central Coast, Mr David Harris, half of all train passengers travelling from the Central Coast to Sydney will be forced to travel backwards on the new intercity fleet.

“Seating will be fixed, not reversible, on the new intercity trains, including ones to the Central Coast. “The Berejiklian government made this decision will full knowledge that passengers have a strong preference for seats that face the direction of travel,” Mr Harris said. Documents obtained by NSW Labor under Freedom of Information laws reveal that the government was warned that “half the passengers on a fixed seating train usually face backwards, which is not always popular for passengers on long journeys.”

According to Shadow Minister for Transport, Ms Jodi McKay, passenger feedback on the design for the new trains indicated that there is a strength of preference for reversible seating and that fixed seats are perceived as a backward step. “Instead of providing passengers with what they want on long distance train journeys, the government has proposed a spin campaign to manage customer expectations prior to the trains arriving without reversible seating. “The Berejiklian Government has previously faced strong criticism for purchasing the trains from South Korea, with no local content in their manufacture. “Premier Berejiklian has regularly said ‘the customer is at the centre of everything we do’, except it seems when it comes to providing passengers a comfortable journey.

“These documents reveal that the government knows that this will be an issue, but it’s going ahead with it anyway,” Ms McKay said. “For some passengers who suffer motion sickness, travelling backwards is just not an option,” Mr Harris said. “The journey for some Central Coast passengers can be almost two hours, that’s a long time to sit facing backwards or to be forced to stand,” he concluded.

Seismic testing should be stopped until lax regulations are addressed