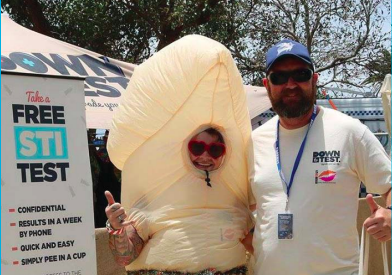 NSW Health introduced a new initiative to get young people thinking about their sexual health at the Coast’s own, Mountain Sounds Festival.

During the popular event, that attracted thousands of young people to the region in February, NSW Health introduced its ‘VIPee’ treatment as part of their, Down To Test, campaign.

Down To Test is a campaign that encouraged young people to be more aware of the prevalence of Sexually Transmitted Infections (STIs) and the realities of how these infections spread. VIPee is a unique initiative where Mountain Sounds revellers could gain access to an exclusive area in the festival provided they submitted a urine sample that was tested for Chlamydia.

The exclusive access area offered festivalgoers a hygienically clean toilet, a phone charging station, and a glitter bar to freshen up their party look. Dr Chris Bourne, Head of the NSW STI Program Unit, said there were 28,000 Chlamydia notifications, mostly in young people, in NSW in 2017, and it’s hoped that this initiative will help reduce the stigma around regular testing.

“Music festivals are a great opportunity to reach people aged between 15 and 29 to help normalise STI testing and remind them that condoms are the best way to stop the spread of HIV and STIs,” Dr Bourne said. Dr Bourne said the Down To Test program, first trialled in 2017, is being monitored by The Centre for Social Research in Health (UNSW), which found that the campaign to date is working.

International Year of the Nurse and the Midwife celebrated