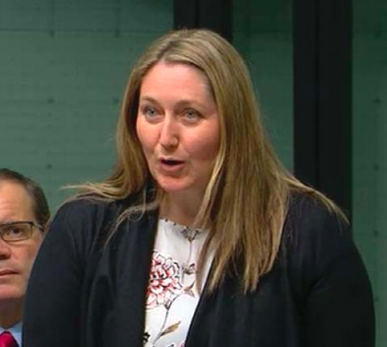 More than 950 older Australians on the Central Coast are waiting for home care packages, and some have been waiting for more than 12 months, according to the Member for Dobell, Ms Emma McBride.

Ms McBride said they were among 100,000 older Australians waiting for home care, among them close to 78,000 who had high needs, many of whom have dementia. “Many older Australians want to stay in their own homes, and home care makes that possible but, as confi rmed in Senate estimates … this government is letting them down,” she said. Waits of more than a year for high-level care had been confirmed in Senate estimates, she said. “This is a disgrace, and today I called on the Government to act. “I told the House of Representatives about Joan, a 91-year-old constituent of mine, who had waited 12 months for home care, only to be the victim of a ‘glitch’ that led to her being out of pocket $2,700 a month for four months. “Joan had been doing well in her own home until just after her 90th birthday.

“After a trip to hospital and recuperation at her daughter’s home, Joan qualifi ed for a level 4 high-needs package so she could return home. “That was in September 2016, and it took until October 2017 for that care to be approved— more than 12 months. “But there was a glitch. “Although My Aged Care had approved Joan for level 4 care, she was only registered with Medicare for level 2. “That meant Joan was spending her allocated $3,600 a month when in fact she was only receiving $900. “That left her $2,700 a month out of pocket and it has taken four months to sort out. “Long waits and mistakes like this are not acceptable, not for individuals and not for their families.

“This government must sort out its home care debacle. “Glitches such as these, and long waits such as these, are unacceptable. “The Government’s home care package changes were meant to put older Australians at the centre of their care, but they are being let down. “These long waits put enormous pressure on families, particularly in a commuting region such as the Central Coast. “Of the 950 people waiting on the Central Coast for home care, 315 are waiting for the highest need package level 4, 292 are waiting for level 3, 346 for level 2, and a small number for level 1. “As a daughter of someone who recently needed in-home care, I say that this must be fi xed now,” Ms McBride said.