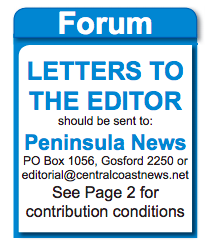 I am writing to respond to Ms Genny Murphy’s accusations against me printed in Edition 439 of Peninsula News (February 26), following last month’s official opening of new social and affordable housing at Woy Woy.

Ms Murphy’s email claimed that I was “rude”, lacked “respect” and ignored the Member for Gosford, Ms Liesl Tesch. I categorically deny these claims. On the contrary, I acknowledged Ms Tesch in my speech. The photographer to which Ms Murphy also referred in her letter was not a staff member or volunteer of mine but was contracted independently by the event organiser.

Ms Murphy is a long-time member of the Australian Labor Party and was an active supporter of Liesl Tesch’s campaign in 2017. I would suggest that next time she makes spurious claims, she first checks her facts more carefully before making any such petty and untrue accusations. I would also like to commend Pacific Link Housing, ably led by Mr David Bacon, who in partnership with the State Liberal Government are providing 31 new social and affordable houses in this new complex.