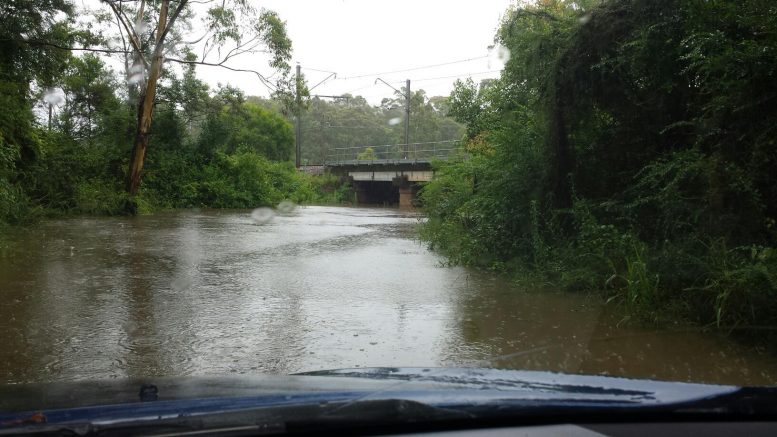 Mr David Harris, speaking in his role as Shadow Minister for the Central Coast, said he did not believe there was any hope of stopping the intercity rail maintenance facility from being constructed on flood-prone land at Kangy Angy, even though residents vowed to continue to fight the multi-billion dollar development.

Mr Harris said he believed that Transport for NSW was the “most belligerent government department ever known, and never takes a backward step. “I have said to that group of residents right from the start and ever since… that Transport for NSW was not required to complete an Environmental Impact Statement (EIS), only a Report on Environmental Effects (REF), so there has been no study of the consequences of the development beyond the development site,” Mr Harris said. He said he believed the Kangy Angy Action Group’s (KARAG’s) claims that flooding from Lisarow through to Chittaway Bay would be exacerbated by the facility, which includes a bridge over the railway off Enterprise Dve, and massive fill to build land along Bangalow Creek up to the level of the current railway line. “One can only assume it will cause issues because Transport for NSW has not had to demonstrate its consequences on the rest of the catchment,” Mr Harris said. If properties not previously flooded did experience flooding after the construction of the rail maintenance facility, or if flooding was worsened by the presence of the facility, “it would be up to residents to sue the government, which they can do,” Mr Harris said.

“I think it is at a stage now because they have let the contract, that it is only a matter of time before they begin construction,” he said. KARAG campaigner and Orchard Rd Kangy Angy resident, Ms Tracey Stewart, said she would keep fighting. “We have sent another letter to Council asking them to still help, to advocate on our behalf,” Ms Stewart said, following correspondence between Mayor Jane Smith, and Minister Constance refusing Central Coast Council’s offer for Transport for NSW to move the development to the site they originally preferred at Warnervale. “The response from Andrew Constance was the same response he’d sent to another letter in April 2016,” she said. Ms Stewart repeated KARAG’s claims that TfNSW continued to ignore information from its own Review of Environmental Factors (REF) showing that Warnervale was a better site than Kangy Angy on “flooding, noise and environmental grounds”.

“This is the Ourimbah floodplain, and I already know from speaking with construction staff that they are finding it very hard to find footings because there is no bedrock. “This is the point, they are aware of those facts, yet they are still pursuing this,” Ms Stewart. “We heard they have already changed from pile driving to clamping to get their footings for the bridge. “Yes, of course, you can build practically anything on any sort of substrate, but it is the cost that becomes the factor. “How much are you prepared to put into this bottomless pit?” Ms Stewart asked. “They still haven’t come out with a final figure, and it is going to be so way over their estimated $300m budget. “They could still get this thing in at Warnervale way before the end of next year, which is when the first trains arrive. “It is a relatively straight fast track section and there is no reversing back down the line required like there will be at Kangy Angy, because there is a northbound line. “From the very start of this, my absolute and genuine concern has been about what is going to happen with the flooding in this area,” Ms Stewart said. “The effects of filling this site, doing what they are doing, it is a monumental failure of the system to do what they are proposing to do. “We have a meeting with the construction company, John Holland, and Transport next Thursday, March 22.

“We are going to remind them that there are no services, no water, sewerage, no gas lines for their facility; if we have gas at our houses, it comes from a bottle in a truck,” she said. “I was shocked by how quickly the Federal Minister, Josh Frydenberg, wrote off the endangered Mahoney’s toadlet. “It is so frustrating, to consider that 3,984 endangered Melaleuca biconvexa will be bulldozed, but they don’t care because it is only 1.6 percent of the local population. “They don’t seem to understand the role those trees play in stabilising the floodplain,” she said. “There is an issue literally at every turn with this thing. “We wrote to Luke Foley and Jody McKay about the safety issue of getting the trains back up the line, with the Wyong Chronicle article attached, but we haven’t heard back from anybody. “We have only been here for 15 years, but I have seen the 2007 flood and a couple of people nearly literally lost their lives that night here. “We have since lost a cow in a flood, so knowing how much worse it is going to get when they fill the land over here and take away the Melaleuca biconvexa, it is worrying.” “Then there is the matter of TfNSW’s financial irresponsibility, and if Kangy Angy was the only place that they could put this facility, it would be too bad for us, but it is not the only place, and that is what keeps driving me as there is a way more suitable place for this to go. Their original preferred location has become available. “It has been offered to them by Council and they said no,” she said.

Order of Australia for services to the air force community