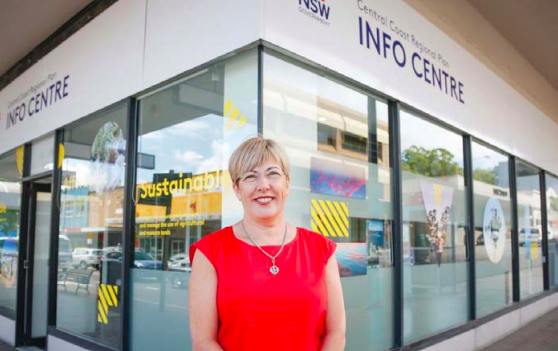 Central Coast’s Coordinator General, Ms Lee Shearer, has flexed her muscles and announced the termination of a planning proposal for Gosford’s CBD.

The proposal, versions of which had been in play since 2014, was intended to redefi ne Gosford’s commercial core by refocusing it around Kibble Park and towards the waterfront. It included new height and gross floor area incentives, introduced new design and development controls for tall buildings, and included preparation of a Voluntary Planning Agreements policy that would’ve enabled Council to collect additional funding from developers. Ms Shearer wrote, on February 23, to inform Central Coast Council that it was the intention of the NSW Department of Planning and the Environment to terminate the planning proposal. According to a report from Council’s Environment and Planning Directorate, reasons given by Ms Shearer included that conditions that led to the planning proposal had changed and it may no longer be an appropriate planning response for Gosford.

Moving the zone boundaries between the B3 and B4 zones, and extending the B3 zone south and east, as set out in the planning proposal, were also yet to be adequately justified. “The decision to terminate the planning proposal has been endorsed by the Delivery Coordination and Monitoring Committee, which is charged with progressing the implementation of the Central Coast Regional Plan 2036, and comprises multiple government stakeholders, including Central Coast Council,” Ms Shearer said. “The bonus incentive planning proposal had taken too long and was no longer an appropriate response for Gosford.”

The proposal was initially intended to be finalised in 2016 and to operate for two years. Following a period of extensive consultation with key stakeholders, the Government Architect is preparing recommendations for the UDIF to guide the revitalisation of Gosford City Centre that are due for submission to the NSW Government by May. Once the recommendations have been received, the Government will be in a position to consider how best to proceed with the revitalisation of Gosford City Centre. As a result of the letter from Ms Shearer, Council staff will review options for planning and development in the Gosford’s centre against the recommendations of the Urban Design Implementation Framework.

At its March 12 meeting, Council asked its Acting CEO, Mr Brian Glendenning, to prepare a detailed report and brief Councillors on the current planning controls and initiatives for the Gosford CBD. Mayor Jane Smith, who was a strong opponent of the planning proposal before she was elected to Council, said she believed it was not well known that current planning controls already allow developments up to around 20 storeys in different locations. Council formally noted the extensive work of the former Gosford Council to incentivise development in the CBD, with development incentives, and extensive investment by all levels of Government. Mayor Smith said it was time to find ways to activate the development consents in place already.

“Council has been doing what it can to get development moving on the Coast, we have planning controls in place and are directly investing millions in catalyst projects,” she said. “There are numerous empty or dilapidated buildings in the CBD that were granted consent under generous planning incentives, and they could be built now, that is what we are all waiting for. “It’s time that developers step up and deliver on the approved development applications. “Gosford is the regional capital of the Central Coast and should reflect that title and we will continue to do everything we can possibly do to ensure that happens.”

Mayor Smith said it was now time for the developers, particularly those who had DA approvals when the former Gosford Council’s bonus provisions were in place, to step up and activate those approvals. “They need to start delivering because there has been a lot of land banking,” she said. The Mayor did not apologise to landholders who may have acquired property on the expectation that the planning proposal would result in changes to the Gosford LEP to support their plans. “They have got to fit in with the planning controls we have got, and we can’t write planning controls to suite one developer,” Mayor Smith said. She also commented on some of the bigger projects that had been approved by JRPP in line with the former Gosford Council’s bonus provisions.

The Waterside triple towers development on the corner of Baker St and Georgiana Terrace was one such example. “It has an approval on it, it went to the JRPP, and that has perhaps highlighted why that planning proposal has not been delivered,” she said.