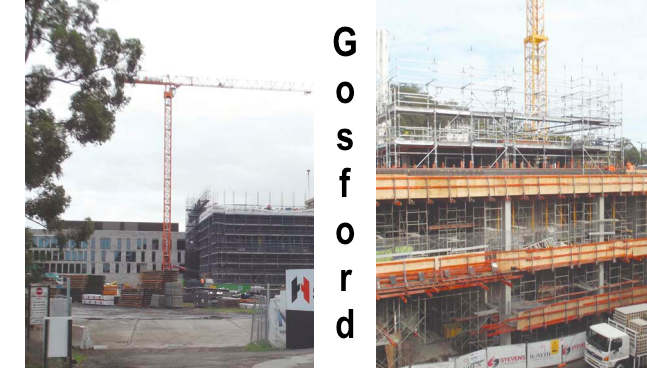 Central Coast businesses are reporting a major boost to business in the Gosford CBD, as new jobs continue to flow into the new ATO building in Georgiana Tce and builders work in the CBD on the various construction sites.

During a recent visit to the Gosford ATO site, Member for Robertson, Ms Lucy Wicks, met with the ATO to deliver feedback on the Coalition’s commitment to the region.

“The first of the 600 new ATO employees started work at their desks last year, which is fantastic news for our community,” Ms Wicks said. “I’m pleased to confirm that we are already seeing an uplift in Gosford CBD that’s being felt by businesses, local families and the wider community. “This ‘coffee shop economics’, based on the simple premise that each of the 600 employees will be grabbing their coffee in Gosford, and not in Sydney or Newcastle, creates more confidence and more jobs.” The Good Bits Co, a new coffee shop near Kibble Park, has seen profit from the new workers.

Ms Lydia said, ‘the popularity of our cafe is spread through word of mouth, and we’ve now got some great regular customers that are ATO staff. “We’re all about pumping up Gosford, and these jobs have really made a difference to the area.’ Ms Jan Gairn, from Ray White, Gosford, said that with greater career opportunities it’s making Gosford and the local area a more vibrant region, and the economic stimulation is already significant at a grassroots level. She said that this has become evident with small business owners opening their doors in and around the Gosford CBD.

“The minority of people travelling from the Hills District and the North Shore area of Sydney to Gosford for employment, anecdotally, are saying that they are considering making a permanent move to the coast because of our region’s lifestyle and affordability,’ Ms Gairn said. Mr Peter Blacker, from Central Coast Leagues Club, also said that the injection of jobs from the ATO has been really positive for Gosford. Mr Blacker said that they have seen an increase of people walking the streets, Gosford hasn’t been like that in a long time. Mr Rod Dever, President of the Gosford-Erina Chamber of Commerce, confirmed that the construction of the ATO and the commitment to deliver 600 new jobs has been a positive development in terms of the Gosford area.

Mr Dever said, the ATO has held a number of information sessions and has been fantastic in terms of outreach to local businesses, and that having a government department available at a local level has meant that obtaining information is easier. Local businesses are still being contacted to assess the economic impact these policies are having and are encouraged to add their voice. Mr Dever said, “We’ve now had 16 consecutive months of jobs growth, which is the longest run of jobs growth ever recorded. “Our business tax cuts are helping small business to invest, hire and grow. “We want to create even more jobs and opportunities, including for families and businesses on the Central Coast.”

Labor Senator Deborah O’Neill said Ms Wicks should stop patting herself on the back for building a big grey brick box on the waterfront and accept that an unemployment crisis has grown under her watch. “The community was promised public lands on the Gosford waterfront and a performing arts centre on the Gosford Public School site,” Sen O’Neill said. “The Liberals broke their promise and there is still no sign of a performing arts centre, four years later,” she said. “Labor has always supported the creation of more local jobs in our community but there isn’t any indication that the tax office has had any significant impact on our unemployment figures.

“Unemployment on the Coast has skyrocketed to 6.5 per cent, that’s way higher than the state average and well above the national average. “There are 1,300 more jobless people on the Coast since Ms Wicks was elected, and yet she continues to deny that our region faces an unemployment crisis, particularly with youth unemployment at 19 percent,” Sen O’Neill said.