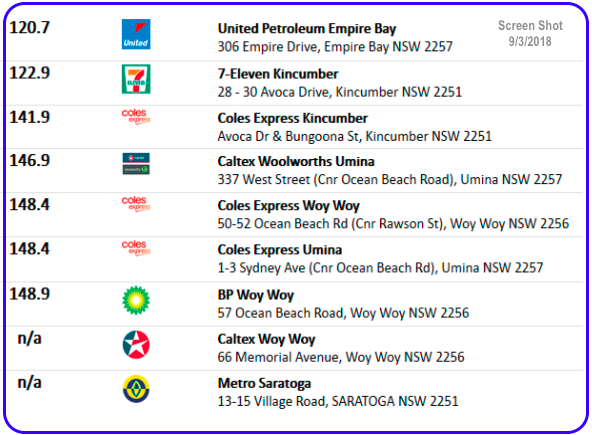 Peninsula fuel prices have been up to 35 cents per litre higher than those charged in nearby Kariong, West Gosford, Erina and Kincumber in recent weeks.

Ms Wicks said she regularly contacted the Australian Competition and Consumer Commission to inform it that the Peninsula’s petrol prices appeared at odds with the rest of the Central Coast region. “I am preparing to write to them again as constituents have been calling with their concerns,” she said. According to Ms Wicks, the Commission has authority to look into areas where there were pricing discrepancies but has not examined the Peninsula as yet. The petrol pricing petition is available from Ms Wicks’ office and online. She said she was aware that inflated fuel prices on the Peninsula made it especially challenging for elderly residents on restricted licenses.

For live fuel prices on the Central Coast click here.