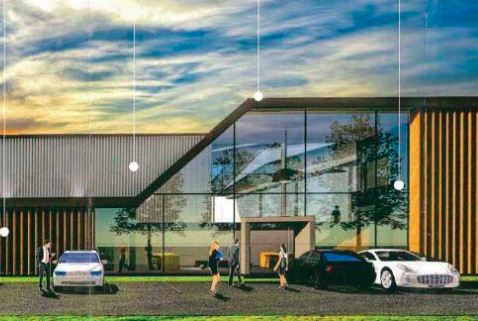 Architect's impression of the AAI hangar and office at Warnervale Airport

A site inspection and confidential briefing that took place between February 12 and 26, has resulted in the further deferral of any decision on budget allocations for the Central Coast Airport.

The briefing resulted in Central Coast Councillors asking more questions of staff, which will be addressed in another report at a subsequent Council meeting. The report will be delivered by the Acting Chief Executive Officer, Mr Brian Glendenning, on March 26. Councillor Greg Best has confirmed that he will also be moving a rescission motion at that meeting, in an effort to reverse the resolution that Council made on November 27 about the future of the airport. On November 27, the Council resolved to request that staff prepare a strategy and report to reallocate the airport’s $6m budget for 2017-18, to employment generating projects across the former Wyong Shire.

On February 12, a report to the ordinary Council meeting revealed that $900,890.97 of the allocated $6m, had already been spent. Councillors were also informed that they had current legal obligations to Amphibian Aerospace Industries (AAI) Pty Ltd to undertake further works and seek the issue of statutory approvals. Staff recommended that Council resolve to spend a further $1.63m for works and activities to meet its current legal obligations. The details of those obligations remain confidential, along with advice concerning the potential litigation.

Councillors moved to defer the matter to February 26, following the briefing and site visit, and they also resolved to seek legal advice to examine the terms of the lease, and the information available to Council at the time the lease was executed, “so as to inform the Councillors on whether or not the terms of the lease were favourable to execute, and to mitigate any liability that may arise from maintaining the position to suspend works”. Council is in dispute with AAI as a result of the Council’s resolutions of November 27.