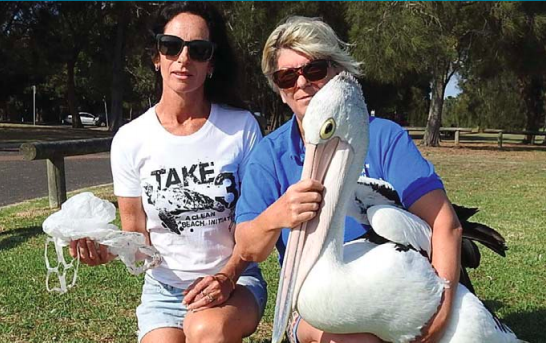 Central Coast Council has adopted a motion to review its Litter Policy and to lobby the NSW State Government to increase fines for littering.

“As a newly-formed region, we now have an opportunity to be a leader in this issue and drive the national debate for a change to tolerance to the damaging litter, washing into our beautiful beaches and waterways,” said Clr Bruce McLachlan, who put the motion to the February 26 Council meeting. Take 3 CEO, Mr Tim Silverwood, recently addressed Central Coast Council and offered to form an education partnership to roll out a program to increase awareness of littering and its consequences.

“As a region, we can follow our local Take3 success story, and build on it, with a new vision for the Coast,” Clr McLachlan said. “But are increased awareness campaigns enough without major deterrent and enforcement? “We have had decades of Do the Right Thing and Don’t be a Tosser cam, yet the litter volume has just kept increasing. “You have had the carrot, is it now time for the stick?” Clr McLachlan said he called for a major increase in litter penalties, as well as increased education and enforcement, including adequate resourcing of the Council Rangers Department.

He said he would like to see a major increase in littering fines from $250 to $2,500 for individuals. He said he realised he did not have the support of fellow councillors for even a five-fold increase, so he raised doubling penalties, but that still did not gain support. “Littering is no longer a soft crime,” he said. “It’s well documented on how hard it is on our marine environment, so is it not time to have hard penalties? “If my fellow Councillors are looking for evidence of the effectiveness of increased penalties, then I suggest they look no further than Singapore. “It has been the most successful campaign in the world on litter reduction, and Singapore went from one of the dirtiest countries on earth to now one of the cleanest,” Clr McLachlan said. As an outcome of Clr McLachlan’s motion, Central Coast Council has resolved to do a review of its policy, look at the effectiveness of increased fines, and then to lobby the NSW government with its findings.

“Instead of just another litter policy, why can we not have a whole new vision for the Central Coast?” Clr McLachlan said. “We have third-world looking roadside verges, our footpaths strewn with rubbish to our choking drains, and estuaries and lakes drowning in filth, litter and plastic, which kills our marine and bird life. “Why not a vision of instilling pride in the Coast. “If our Council and RMS look at our key entry point to the Coast as the first impression of our Region, this would be a good starting point. “I will be asking my fellow Councillors to really push hard for a change of attitude and a new vision as a leading region on the issue of damage of litter to our environment.”