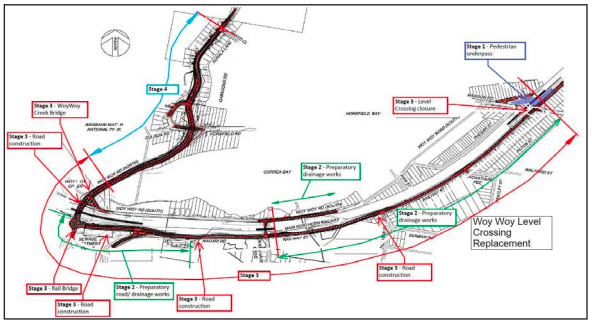 Detailed plans for the four stages of a project

Central Coast Council has called on the NSW Government to recommit funding to the Woy Woy rail underpass at Bulls Hill.

The council will approach the Premier, Transport Minister, Roads Minister and Parliamentary Secretary for the Central Coast It will also seek a funding commitment from the Leader of the NSW State Opposition, respective Shadow Ministers and Gosford State Member if they win the next State election. The Council will prepare a statement of the need for and benefit of the works for presentation to the Government and Opposition.

The action was taken after the council unanimously supported a motion put by deputy mayor Cr Chris Holstein and seconded by Cr Richard Mehrtens. Cr Holstein said: “In 2011, the soon-to-be-incoming Liberal Government committed to the construction of a new railway underpass to remove the Rawson Rd level crossing. “In addition, a pedestrian’s underpass would also be constructed. “The then Gosford Council was given carriage of the works. “Scale and scope of the works were assessed and amended, the budget increased and work commenced. “The pedestrian underpass was constructed and opened but the road underpass was ‘shelved’ on the basis it was too expensive. “The belief is that the railways department construction options were cost-prohibitive thus resulting in the decision to ‘shelve’ the project”.

Speaking for the motion at the March 12 Council meeting, Cr Holstein further commented that the project was “key and critical to tens of thousands of motorists every day that go up Woy Woy Rd, for their safety”. “The other day in the Daily Telegraph it was good to see a conversation about fast rail and the Premier talked about the need for additional funding to go into safe rail crossings. “This is crucial for the Peninsula. “It is an issue that, for whatever reason, was taken off the agenda and just I want to put it back on the agenda.” Cr Mehrtens said the crossing replacement project had become a “political hot potato”. “It has gone through so many iterations that it is time for a reevaluation of what the project looks like and what it will cost because both have blown out.

“If there was any other road, any other situation where someone had died, ask any of my colleagues considering running at the next state election, and they have said they may want to bring it to the attention of the electorate,’ Cr Mehrtens said. Cr Rebecca Gale Collins proposed an amendment which included Council being briefed on costings case for the underpass and considering contributing financially 25 percent of business case cost. The amendment was seconded by Cr Chris Burke. Cr Holstein said he could not accept the amendment and called it “just a diversion to step away from the intent”. “The outcome is what the motion is about and the amendment doesn’t address it.” The amendment was then put to the vote and lost and Cr Holstein’s motion was put and carried unanimously.

Terrigal water audit due for release