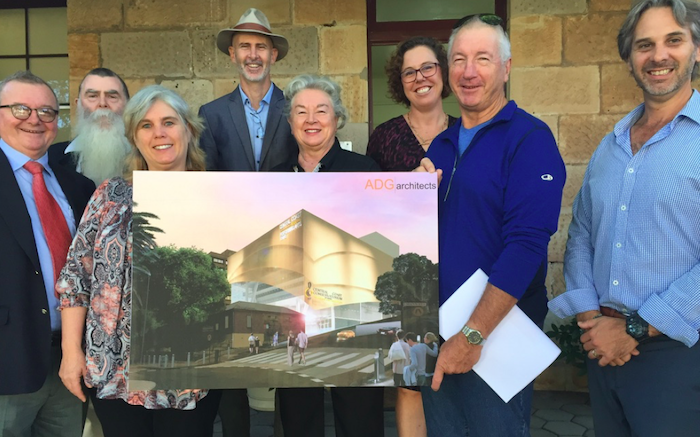 Their design consists of six storeys with two basement levels. The proposed site consists of both Crown Land and land owned by Central Coast Council. Mr Patrick Brennan, CEO and Artistic Director with the CCCM, said a Regional Performing Arts Centre incorporating the Conservatorium was a rare opportunity for the Coast to have a world-class facility that attracts people to “work, learn, perform, play and meet. “The Federal, State and Local Governments, in committing funds to this project, have provided a brilliant opportunity for an iconic and significant building on the Coast,” Mr Brennan said. 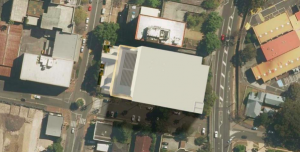 An aerial view of the Conservatorium’s proposed building footprint

“Which is why the Conservatorium has spent the past 18 months working with a local architect, Mr Anthony Kelly, and his team at ADG, to make sure the Central Coast has something that will serve the needs of our regional community, as well as those of national and international performers,” he said. Mr Brennan said the detailed plans were a result of ongoing dialogue with arts stakeholders across the Coast around how to secure and grow the future of performing arts on the Coast.

“These include the many ensembles, choirs, bands and performers we are fortunate to have on the Coast; parents of our many individual students and also those from the schools we partner with to provide music education to thousands of children; the University of Newcastle; and operators of international and national performing arts venues. “Our purpose in launching these plans today is to provide a vision for the RPAC as the centrepiece for a living, breathing hub for the community, a space that is used 18 hours a day by students, local arts groups, visiting performers and entertainers, bands, orchestras and ensembles, conference groups and many others.”

Mr Brennan said the Conservatorium had initially just looked at what could be done to secure its own premises, but quickly became aware that, as one of the largest cultural institutions on the Central Coast, it was a key stakeholder and major tenant in the RPAC. “It just makes so much sense for the Conservatorium to be part of the Coast’s major performance facility, and there is so much local expertise on the Coast that can be drawn on to design and build this facility,” he said.

Mr Brennan said the Conservatorium group was well advanced in terms of the conceptual design phase and moving towards the design documentation stage, which would require further input from all stakeholders, including engagement with acoustic engineers and other design consultants. The Conservatorium is aware that Council is investigating six sites for a stand-alone RPAC and, as a key stakeholder and future tenant, is keen to engage in a constructive partnership and lend its expertise to any work that Council may be undertaking.

The Conservatorium’s draft technical specifications are for an architecturally designed building with multiple fl exible spaces, a minimum fi vestar sustainability rating and equitable access for the public and performers that has a: flexible 1,000 seat auditorium with an Orchestra Pit, removable Proscenium Arch and Fly Tower; 200 to 250-seat ‘black box’ with tiered removable seating; 350 seat acoustic auditorium with a large concert platform; teaching rooms and large rehearsal rooms; multi-sized holding rooms including mirror room and barre; entry atrium connecting the public entry spaces to the breakout area of the RPAC and smaller auditoriums; and, an underground car-park with 600-plus spaces.

The CCCM is the third-largest Conservatorium of music in NSW. It has Tier One Status amongst Regional Conservatoriums, which it has maintained for the past six years, and delivers in excess of 35 000 equivalent teaching hours per annum. The CCCM employs 70 music teachers and has in excess of 400 one-on-one students. It supports more than 20 ensembles from small Chamber groups to a full Youth Symphony orchestra. Central Coast Opera Company is run by CCCM and it provides tuition in 25 schools on the Central Coast in the public, systemic and private spheres. This is generally in the provision of tutors and conductors in school band programs.

Executive Officer for the Friends of the Performing Arts Precinct, Mr David Abrahams, has written to Central Coast Councillors asking them to support the Conservatorium’s proposal “Despite all the promises and delays over the years FOPAP has maintained our commitment to bringing the community together around this important project,” Mr Abraham’s letter said. “We believe that the RPAC could be the defining piece of civic infrastructure that will signal Gosford’s renewal as a regional city to the state as a whole,” he said.

“We urge you to seriously recognise the Central Coast Conservatorium of Music as a key part of your decision making,” Mr Abrahams said. “They not only represent the key tenant that underscores the financial viability of the RPAC they also represent one of our most significant locally based educational institutions, one with a growing national and international reputation. “We urge you to work with the very significant group of performers, professionals, designers and community advocates as close as possible and take their expertise seriously.

“All of these have been working with the Conservatorium of Music over the last 18 months. “We urge you to consider making the RPAC both iconic in its architecture and world-class in its commitment to musical performance space and education. “We urge you to work collaboratively with the State Government and their agencies to deliver the project and not to be overly locked into political corners when considering options.

“We encourage you to seek further funding that tops up the State and Federal government commitments. “It is our understanding that both are open to such approaches. “The region has been woefully underfunded in arts infrastructure over the years and a strong case can be put in this period of the election cycles.