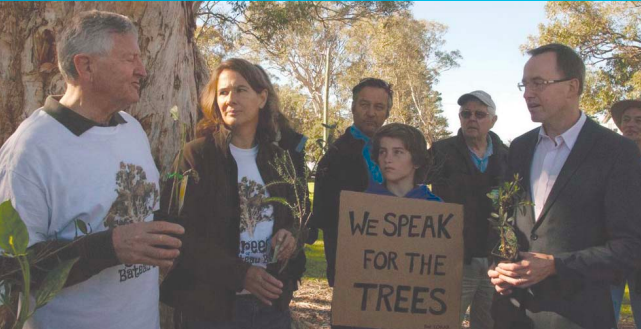 The former Wyong Council’s controversial tree policy has been replaced with the Tree and Vegetation Management Chapter of the Gosford Development Control Plan 2013.

Independent Councillor, Louise Greenaway, was instrumental in having the former Council’s tree policy amended by Central Coast Council. Following community consultation and intense debate at its February 26 meeting, Central Coast Council adopted a reworded Chapter in the Wyong Development Control Plan 2013 (WDCP) that is consistent with the Tree and Vegetation Management Chapter of the Gosford plan. One impact of the amendment was to remove the previous control (or lack thereof) introduced by Wyong Council, that allowed a landowner to remove any tree or vegetation on a residential property of less than 1,500 square metres, without an application. Three members of the community, Mr John Salmon of Bateau Bay, Ms Barbara Gorman of Save Wyong Trees, and Mr Paul Links, a property valuer, all spoke in favour of the proposed changes to the Wyong controls.

“The destruction of trees has taken the Bateau Bay area from a leafy suburb to basically a desert,” Mr Salmon said. “The people have spoken, and the residents are resoundingly in favour of a change to this policy,” Ms Gorman said. “The question is when” Ms Gorman said. She was speaking about options put forward in a staff report to the February 26 Council meeting. She said one of the options would have resulted in further delays and further canopy loss. A 0.05 percent investment out of Council’s $800m budget would enable Council to “start with a position to protect and preserve the environment of the Central Coast and ease tension between neighbours,” Ms Gorman said. She referred to the former Wyong Council’s policy as “disgusting”, and told councillors a wise decision was required of them. Ms Gorman appealed directly to Independent Councillor, Bruce McLachlan, telling him she would back his campaign for a clean coast if he backed the community’s calls for a green coast.

“Keep it green and keep it clean, and this area will continue to be the jewel in the crown of the NSW Coast,” she said, citing that the alternative could look like “Mount Druitt by the sea”. Mr Paul Links, whose parents acquired a property at Buff Point in 1965, said he felt compelled to speak. “The destruction of our urban environment is out of control,” Mr Links said. He said the “explosion” in the number of tree removal businesses now located in the region went hand in hand with the “devastation I have seen in the upper northern parts of Wyong Shire. Mr Links said the “open slather” destruction of trees in suburbs such as Buff Point, Charmhaven, and Chain Valley Bay, was “distressing”, and called for the Council to amend the former Council’s policy. Clr Louise Greenaway had championed the proposal to amend the Wyong Tree Policy, but she expressed her disappointment that staff had not told councillors about a potential problem with the proposed amendments until the afternoon of the Council meeting.

Clr Greenaway said she attempted to “speak about what happened in the meeting room before the meeting, to inform those present in the gallery”, but was instructed by Mayor Jane Smith, to move her motion instead of making preliminary statements. Clr Greenaway complied with the Mayor’s directions and added a part three to the motion to request a comprehensive report from staff about costings of the new tree policy implementation, reallocation of resources on adoption, reinstatement of tree inspection staff, whether there would be an income stream from the applications and fines, and whether there would be likely cost savings from adopting appropriate tree and vegetation policies. Her motion was seconded by Clr Kyle MacGregor. According to Mayor Smith, Councillors had received a briefing from staff before the public meeting that indicated that they may not have been able to proceed with debating the tree policy because of inconsistencies between what Councillors were proposing and the State Government’s biodiversity conservation reforms, introduced in August 2017.

Staff informed councillors that the Development Control Plan on tree and vegetation management needed to be consistent with the reforms and that the DCPs of the former councils would need to incorporate the rules, and introduce thresholds for clearing of native vegetation. Clr Greenaway said: “Just so the gallery can understand, my motion of November was that Council seek legal advice, so when we came in for our briefing this afternoon, the legal advice hasn’t been obtained and furnished to us, however, the item has been put on the agenda. “I just wanted the gallery to be aware of the situation that we have been placed in,” Clr Greenaway said. “This motion has been a long time coming. “Ever since the Wyong Council Tree Policy of April 2015, was mooted, many people have come to express horror. “The policy proposed tonight is nothing frightening, alarming or prescriptive, it is not even new.

“I could list many reasons why the current tree policy is bad.” Clr Greenaway said she believed the policy of the former Wyong Council had “enormous and irremediable environmental impacts…a significant departure from environment best practice”. She said it had resulted in trees being destroyed at a rapid and unprecedented rate. “Many animals lost their habitat, many in fact lost their lives,” she said.

“People decried the loss of the character of their neighbourhoods.” Clr Greenaway said that rather than facilitate the destruction of trees, Central Coast Council should ensure that they are recognised for their value, and she hoped the changes would herald a new outlook for the Central Coast. “I plan to revisit tree management issues right across the Coast,” she said. Clr MacGregor said: “What it really comes down to here is why did we run for Council, why did we want to be in this chamber…to protect the regional integrity of the Central Coast, to promote the things we love. Clr Greg Best moved a staff recommendation to not proceed with Clr Greenaway’s proposal and his amendment was seconded by Clr Chris Burke.

“I think we need a bit more education and I would like to put it out to the public again; I think we will get the same result, but I think we will get it more legally done,” Clr Burke said. The amendment was lost when put to the vote, as was an alternative motion put by Clr Bruce McLachlan to defer the matter until legal advice was received. The public gallery applauded the Council for adopting Clr Greenaway’s motion. The amendments finally accepted at the February 26 Council meeting were exhibited in December 2017, with 119 submissions received, with 84 percent of those submissions in favour of the proposed change. Mayor Jane Smith said that it was an important step for the Central Coast to have a consistent approach to tree management controls that demonstrated best practice in sustainability and that enhanced and protected the local environment.

“Trees and the greenery of the Coast is one of the reasons people love living here and we need to ensure that it is protected and enhanced,” Mayor Smith said. “We have undertaken initial consultation with the community on this issue, heard their comments and concerns, and have a clear mandate to continue down this path of policy alignment,” she said. “It is imperative that Council establish clear and consistent policies for our residents, that align with community sentiment and deliver for the Coast. The Acting Chief Executive Officer, Mr Brian Glendenning, will organise a workshop for Councillors on implications of the new policy, with a further report to come to Council.

A report will also come to Council in relation to developing an Urban Forest Policy to protect and enhance the environmental amenity, ecological value and scenic character of the area. “It was a fantastic outcome, and all credit to Clr Greenaway and the community representatives that have been campaigning for a better tree policy in the Wyong area,’ Mayor Smith said.