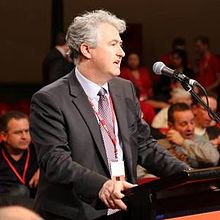 Adam Searle Leader for the Opposition in the NSW Upper House

It has the support of the Labor Opposition and the Greens in the Legislative Council, which is the upper house in the NSW Parliament. The Bill would effectively stop any chance of the Wallarah 2 mine proceeding after 20 years of community opposition to the mine.

Previous versions of the Bill, introduced to the lower house by Shadow Minister for the Central Coast and Member for Wyong, Mr David Harris, were voted down and defeated by the Liberal and National parties. “It is hoped that support can be gained from the Shooters, Fishers and Farmers party, Animal Justice party MLC, Mark Pearson, and Fred Nile’s, Christian Democrats, to pass the Bill and force the Government to reconsider passing it in the lower house,” Mr Harris said. “The Government has failed to allow this Bill through the lower house, but the numbers are a lot tighter in the upper house, where no one has a clear majority,” he said. “Labor and the Greens are for it, I’m hoping that the rest of the crossbench will vote in the interests of the Central Coast and stop this mine going ahead.

“This Bill is designed to protect our precious Central Coast water supply from destructive longwall mining. “We will fight this through every avenue we can until the mine is stopped.” On March 19, Mr Harris confirmed that the Bill has had its second reading in the Legislative Council and that lobbying of crossbench Members of the Legislative Council would continue until parliament resumed in the second week of April. “If we get it through the upper house, the government will have to take it to the lower house again,” Mr Harris said. He said he believed it was significant that the Federal Minister for Environment and Energy, Mr Josh Frydenberg, had decided to extend by six months his consideration of Wallarah II under the Environmental Protection and Biodiversity Conservation Act (EPBC Act).

“It means that they are having a proper look at it,” Mr Harris said. “The Kores submission covered the bare minimum, and the Water Trigger and the spotlight on the Adani decision mean the Federal Government are being extra cautious. “The Federal Government also has a very marginal seat in Robertson and I think they are starting to realise that Wallarah II will have an effect across the region,” he said.