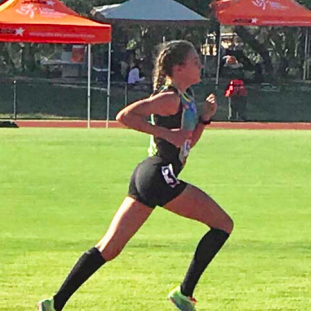 Young aspiring Mardi athlete, Ashley Pernecker, has been selected to compete at the 2018 Track and Field Tour, held in Canada in July.

At just 13 years of age, the pocket rocket is already an inspiration to many, juggling school and a heavy training schedule. With a dream to study in America on a sports scholarship and to compete at the Commonwealth and Olympic Games, Pernecker is ready to do all it takes to become a world-class runner. Despite being in her teens, Ashley has already achieved a lot in her athletic career, with her most recent achievement being selected to compete in Canada. “When I was 8, I ran the HRIS Cross-country (XC), and out of 100 runners, I came 18th,” Ashley said. “After that, I wanted a coach and never wanted to go on holidays again,” Pernecker said. “A few months later, after continuing to pester my parents, my mum phoned my new coach, Tom Ristuccia.

“I started training with him that year and medalled at HRIS every year since. “Once I started winning medals, I became very competitive and fell in love with the sport even more,” she continued. Bernecker is currently competing in a range of events but said she enjoys track and field the most. “I haven’t decided yet what main distance to focus on long-term, however, if I am at a serious event, I focus on the 800m, 1,500m and 3km. “I also enjoy longer road runs, and have competed overseas and won races in 5km and 10km events. “I also find the City 2 Surf and Bay 2 Bay challenging but fun. “I have won a 5km race in Florida, USA, as a 12-year-old, a 3km race in New Zealand, where I wasn’t allowed to run a longer race because I was too young, and also won a 10km race in Hawaii last year,” Pernecker said. “When I first started training, my coach told me he had a three-year plan to qualify for Nationals. “I am pleased to say we achieved that goal together and have not looked back. “I have since been to the Nationals several times for both track and XC. “My long-term goal for the 800m is to run as close to two minutes as possible.

“I would also like to run a half marathon and eventually a full marathon, and who knows, maybe one day, a 100km run. “I would like to qualify for the Commonwealth Games in a track event. “I also hope to one day represent Australia at the Olympics, and study at University in America to become a Paediatrician, whilst on a sports scholarship,” Pernecker said. Integrated healthcare services organisation, Coast Sports Tuggerah, has been supporting Pernecker through her journey and have even appointed her as a Coast Sport Ambassador. “Coast Sport provides valuable access to their gym and facilities, not to mention the comprehensive support of a fully integrated team to assist her in all aspects of professional athleticism,” said Ashley’s mum, Julie Pernecker. “Like so many elite athletes, the journey to greatness is often a costly one. “That’s why we are working hard to raise funds to ensure she can race in Canada.” Ashley’s mum, Julie Pernecker has launched a Go Fund Me Campaign. As of March 14, Ms Pernecker’s Go Fund Me Campaign for Ashley’s Canada trip has reached $1,200 of its $5,000 goal.