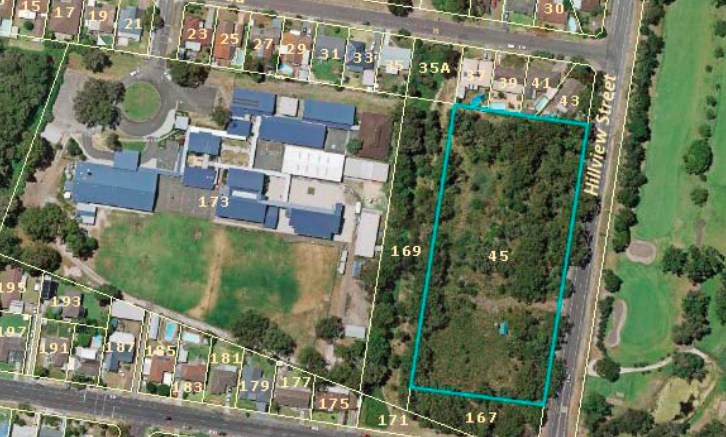 The land on the corner of Veron Rd and Hillview St, Woy Woy

The Central Coast branch of the Australian Conservation Foundation has objected to the nursing home proposed for Hillview St, Woy Woy, in a submission to Central Coast Council.

“The development on this site in its entirety should be rejected and we call for the land to be compulsorily acquired by the State Government with the support of the Central Coast Council,” said branch secretary Mr John Wiggin. “The State Government has the responsibility under the Environmental Planning and Assessment Act for protecting Umina Coastal Sandplain Woodland endangered ecological communities,” Mr Wiggin said. The foundation’s submission said UCSW covers areas of the Hillview St site that were more significant than shown in the developer’s application to Council “yet was discussed to be largely across the area of development by Justice Bignold in the Land and Environment Court case Providence Projects vs Gosford Council”.

“Only around 11 hectares of UCSW remain anywhere in the world,” Mr Wiggin said. “The site of the original development was over 1.16 hectares, more than 10 per cent of this. “This block of remnant vegetation was a gift of land to the Catholic Church which then sold it off to a developer who wished to make a quick buck, although the community acknowledged and recognised the significance of this vegetation and land and have fought to protect the land and its endangered ecological community. “The community sentiment and the regional media in 2004 and beyond were very much opposed to the destruction of this rare bushland.

Mr Wiggin claimed that an undeclared conflict of interest cast doubt over that approval by Gosford Council. “It could be expected that not declaring the potential or actual conflict was contrary to the local government code of conduct and the outcome might have been different if the councillors and council staff had been aware of this significant conflict. “Hence the original development may well not have been approved,” Mr Wiggin said. He said the property had sat vacant for 12 years, and the management plan was not actioned. “The community has been fighting to protect the vegetation understorey and trees that form this endangered community on the current site for over 13 years,” the submission said. “Umina Coastal Sandplain Woodland in the Sydney Basin Bioregion is likely to become extinct in nature in NSW unless the circumstances and factors threatening its survival or evolutionary development cease.

“The number one risk factor is habitat loss through developmental pressures, exactly what is happening with Hillview St. “The information accompanying the application is insufficient to justify the development.” The Foundation’s submission questioned why the developer has not included an Environmental Impact Statement for the Bush Stone-Curlew – also an endangered species under the NSW Threatened Species Act. “This has been sighted on properties on the golf course on the other side of Hillview St and the secondary school on the other side of Veron Rd. “It has also been seen in similar UCSW bushland, up the road. “Only 20 individual birds of this species are estimated to exist on the Central Coast and its presence in the vicinity was not acknowledged in the original Species Impact Statement by Providence Projects or this current 2018 application.

“Further, part of the subject lot has also been identified to contain potential habitat for the following threatened fauna species, Glossy Black Cockatoo, Swift Parrot, Regent Honeyeater, Powerful Owl, Barking Owl, Masked Owl, Koala and the Grey-headed Flying Fox. “The provisions of SEPP 44 were also considered by Council’s Environmental Assessment Officer in the assessment of the original application and the following comment provided: ‘The subject site is identified to contain potential koala habitat as defined under the provisions of SEPP 44 as eucalyptus robusta forms approximately 18 per cent of the existing canopy.’ “ The ACF submission contended the current proposal had a larger building footprint, horizontally and vertically than earlier proposals. “Their bushland protection plan has not been acted on in 13 years and their plans show no cause not to continue the negligence of this significant state-protected vegetation,” the submission said.