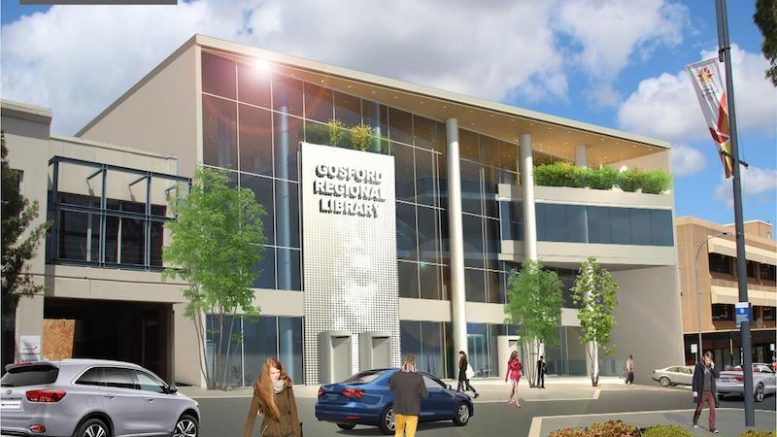 Central Coast Regional Library Concept 1. (This is a design concept, not the final plans)

A 28-day public exhibition period will commence on February 18 to give the community an opportunity to consider two options for the development of the regional library in Donnison St, Gosford.

Mayor Jane Smith said the proposals for the library would be available for public comment through yourvoiceourcoast.com. “We will also be announcing two community consultation sessions to be held at the Gosford Chamber on the same day, one during the day and one during the evening,” Mayor Smith said. Council staff provided councillors with a briefing on the proposed Gosford Regional Library, on Monday, December 11. During the course of that briefing, there was a request that Council exhibit two potential proposals for the Regional Library, which councillors endorsed at their December 18 meeting. Council resolved in February 2017, that the site for the proposed Central Coast Regional Library was 123A Donnison St, Gosford. Council has been in discussions with the adjoining owner to consolidate its land with the site at 123A Donnison St, to increase the commercial activity associated with the proposed Regional Library. 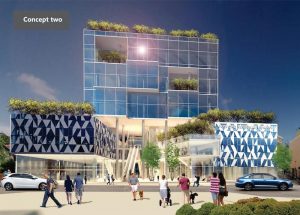 “This may include a combined commercial/ retail and community project which will assist with the ongoing financial support for the library, as well as deliver additional employment, economic stimulus, and assist in kick-starting the revitalisation of Gosford’s CBD,” a report to the December 18 Central Coast Council meeting said. The first concept that will be placed on exhibition is for the Regional Library to be contained on the site at 123A Donnison St. The second concept utilises the adjoining site to create the combined community, commercial and retail precinct that assists with the ongoing financial contribution necessary for the library’s operation, according to the report. “The second concept enables the connectivity of key place-making precincts within the Gosford CBD, centralised around the library, education and Kibble Park,” the report said. “This provides key pedestrian linkages to TAFE, the Library through to Kibble Park, as well as from the Library through to the CBD precinct in Mann St, down to the waterfront and stadium.

“Based on the high-level cost estimate, the project will require an additional capital contribution from Council. “To mitigate this risk, Council will be seeking a pre-commitment for the sale or lease of the commercial and retail space prior to commencing construction of the commercial component of the project. “This pre-commitment will not hold up the commencement of construction of the Gosford Regional Library. “An Independent Economic Study on both schemes will be conducted, and combined with the outcomes of the community engagement, will be presented to Council for their consideration.”

Preferred location for a Regional Library and Learning Centre announced