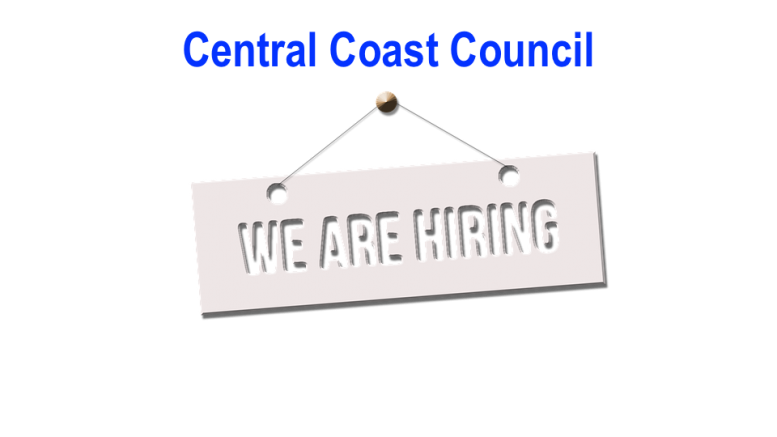 Central Coast Council is looking for a new General Manager

A recruitment company called Davidson has been appointed to assist the Central Coast Council to recruit a permanent General Manager.
The appointment followed an Expression of Interest process, with three shortlisted agencies addressing a confidential session of an extraordinary council meeting, held at the Gosford Chamber on Monday, January 31.
“We are now a major regional Council and a key growth area in the State, and I am confident that we will get quality candidates wanting to fill this role,” Mayor Jane Smith said.
“This is the first crucial step in the process, and we are hopeful of a permanent General Manager within a few months,” she said.
“In the meantime, it is business as usual, and we are being ably led by Acting Chief Executive Officer, Mr Brian Glendenning, who will continue to work with the Council and staff in the best interests of our community.”
The recruitment agency will shortlist a number of candidates who will then be formally interviewed by a selection panel established by Council.
The selection panel will consist of the Mayor, Deputy Mayor, Councillors Burke and Hogan as well as a representative from Davidson.
“The General Manager is the only position at Council that is appointed by the Council, and it is important to have an independent and robust process” Mayor Smith said.
“While the selection panel will make recommendations on preferred candidates, the final decision will be one of the full Council.”
Mr Glendenning will continue to be the Acting Chief Executive Officer until such time as a permanent General Manager is appointed.
At the beginning of the Extraordinary Meeting, Cr Greg Best questioned why the recruitment agency briefings needed to be held in confidence and could not be viewed by the public.
Cr Best asked Acting CEO, Mr Glendenning if any commercially confidential information could be handled in a confidential meeting but the non-sensitive information presented in the public domain “to help transparency”.
Mr Glendenning said the issue was about the “unique practices” of the short-listed recruitment agencies who may have assumed their information would be kept confidential when they expressed interest in the role.
“Those processes have commercial value and are confidential,” Mr Glendenning said.
“These providers are generally very protective of any comparative advantage they think they offer to their clients,” he said.
“There are no secrets in how they go about their business…to suggest there is a special knowledge that they and only they have, is a long bow to draw, surely,” Clr Best said.
“It may be a long bow but it is how those providers perceive it,” responded Mr Glendenning.
“There is a legal reason why they would have the expectation that we wouldn’t do it,” he said.
“They would have submitted the information they had to Council on the understanding that it would be kept confidential and we may be breaching that implied undertaking if we were to discuss aspects of their proposals in a public session,” Mr Glendenning said.
Clr Louise Greenaway said she had raised a question of confidentiality with the former CEO.
“Why do we get agents to act on our behalf who insist on keeping their information confidential?” Clr Greenaway said.
“Could we not make it a policy of council that we at least ask, we don’t want to keep your stuff confidential, if you insist on it, we may not be able to consider you because we are trying to be an open and transparent council.
“Why can’t they come to us and let the public see what they are offering us because we are about to make a very important decision.
“So was that policy put to them, where they asked, do you mind not having this in confidential session?” she asked.
Mr Glendenning said: “This is a highly specialised field where the recruitment of general managers is a very small pool, and they understandably want to protect their intellectual property, so as a general rule, I agree wholeheartedly with Clr Greenaway that it should be the norm, but there will be exceptions such as this where we can expect genuine experts in the field to be resistant about that.”
Clr Greenaway then asked Mr Glendenning to answer her specific question, which were the three recruitment agencies asked whether or not they would agree to make their presentations in a public meeting.
“I’m informed…not specifically, but the expectation I would have thought in that sphere was that they probably would have said no, having dealt with those sort of people before,” Mr Glendenning said.
Clr Kyle MacGregor asked why executive leadership team members were not present at the meeting.
Mr Mike Dowling, Mr Scott Cox and Ms Julie Vaughan were not at the meeting.
“The areas of expertise that those directors who are absent provide to the Council are not relevant to the business that you are dealing with here tonight.
“I don’t know whether any of those might well be candidates for the job and it is better to avoid that potential conflict of interest, so I made the decision to tell them they were not required,” Mr Glendenning said.
Following the meeting, Mayor Smith said, “They were strongest in terms of meeting the Councillors’ needs,” she said.
“Their process involved quite a lot of consultation with Councillors, but all three presentations were strong.”
Mayor Smith said she hoped the position could be filled in two months but may take longer if the chosen candidate was required to give a prolonged period of notice in their current role.

Inquiry moves ahead but referendum stalls

Opt in to keep soft plastics out of landfill