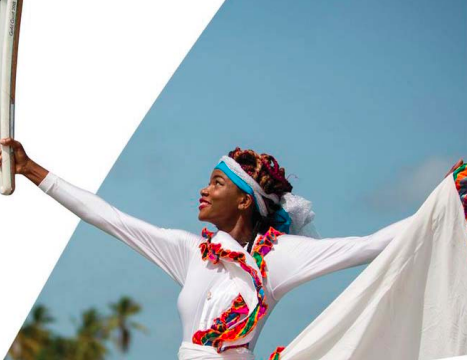 Central Coast Council has announced the entertainment line-up for the Queen’s Baton Relay event at Central Coast Stadium on Saturday, February 3.
The Queen’s Baton Relay (QBR) is a Games tradition that celebrates the Commonwealth’s diversity, inspires community pride and excites people about the world-class event of sports and culture to come.
The Relay is the longest continual promotion of the Gold Coast 2018 Commonwealth Games (GC2018).
It provides an organic global reach for GC2018 across the 288-day International sector, and the 100-day domestic sector throughout Australia.
The goal of the QBR Family Fun Hub event is to raise awareness of the Gold Coast event to local residents, creating excitement in the lead up to the Commonwealth Games, that will be held in March.
Council are aiming to showcase the Central Coast in its best light, highlighting the region’s assets, including the arts/culture precincts at Laycock St Theatre, sporting grounds at Central Coast Stadium, and the waterways at Gosford Waterfront Park and Swimming Pool.
Central Coast Council has recognised that a family and community focussed picnic, with live entertainment and music at Central Coast Stadium will be achievable to reach the objectives.
This will be achieved by including history and cultural connections of the area and embracing local talent, celebrities and entertainment.
To encourage event participation, the event program will be geared towards the water, community, togetherness and healthy living and food, with the key goal for participants to experience a once in a lifetime event.
A QBR Family Fun Hub is to link with Central Coast Council, Community and Local Heroes to celebrate and host a unique experience as part of the lead up to the Commonwealth Games.
The Baton relay will begin at Laycock Theatre at 11.30am, heading down Mann St, Gosford to the community event happening at Central Coast Stadium.
The community event will be a free event where the community can view the Baton as it makes its way into the Stadium with official speeches and ceremonies.
There will be kid’s activity zones with particular themes to cater for all ages, live music, picnic hampers and picnic areas where people can sit back and enjoy the entertainment.
There will also be roving entertainers that will engage with the audience and really capture the festival vibe.
The Baton will then continue to Gosford Olympic Swimming Pool following the waterfront and highlighting Brisbane Water.
The Baton will then proceed onto Sydney for the next Baton bearer stop with celebrations continuing at Central Coast Stadium for the afternoon.
The festivities at the Stadium kick off from 10am, with Brisbane Water United Physical Culture Club, Laycock St Dance, Peninsula Islander Group, The Glen Dancers Aboriginal Dance Group, Dominique Duo, The Ruiins, Kid Zr0 and the Sea Gypsies all scheduled to perform on the day.
Free activities on the day will include: Reverse Garbage Upcycle play areas, Switcharoo Circus performances and free play, Sustainable Education Make your own baton, NSW Cricket Association, Central Coast Junior Rugby Union, Gymnastics NSW, Judo NSW, International Football and Tennis School, Star FM, SeaFM and 2GO.
There will be road closures in effect on February 2 and 3 for the event.
From 6pm on Friday, February 2, until 3pm on Saturday, February 3, Gosford Olympic Pool carpark will have a full closure of carpark and boat ramp.
Other closures on February 3 include: Laycock St between Henry Parry Dve and Pacific Hwy from 6am to 11:20am; Pacific Hwy/Mann St between Laycock St and Donnison St and Donnison St between Mann St and Dane Dve from 11am to 11:50am; Dane Dve to Central Coast Stadium from 10am to 2pm; Central Coast Hwy between Dane Dve roundabout and Masons Pde from 12pm to 12:20pm; Central Coast Hwy between Masons Pde to Dane Dve roundabout from 1:00pm to 1:30pm.
Central Coast Hwy will re-open from 12:20pm to 1pm and Gosford Olympic Pool carpark and boat ramp will re-open from 2pm.
Following is a list of Central Coast locals who will the carry the Baton with pride in the Gosford leg: Rae Anderson of Wamberal; Margaret Beardslee of Killarney Vale; Mary Betts of Jindalee; Benjamin Brown of Bateau Bay; Graeme Carroll of Woy Woy; Angela Deacon of Davistown; Christopher Dodd of Springfield; Dimitry Douglas of Lisarow; Sara Evans of Hamlyn Terrace; Stuart Hayward of Alison; Maria McConville, Green Point; Lester Pearson of Fountaindale; Jamie Pittman of Shortland; Kallan Strong of Wadalba; Peter Thomson of Erina; Teigan Van Roosmalen of Bateau Bay; and Phil Walker of Blue Bay.