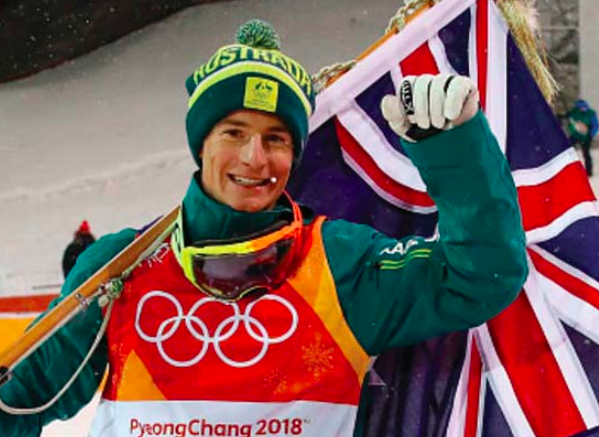 Narara native, Matt Graham, has won a silver medal in the moguls at the PyeongChang Winter Olympic games on Monday, February 12.
Graham is Australia’s first medallist this Winter Olympic Games and was awarded a score of 82.57 in the moguls to win the silver medal.
Graham was sitting in top spot in the six-man Super Final, but was beaten by Canada’s mogul great, Mikael Kingsbury.
The talented world number three came second to Kingsbury, who was awarded gold with a score of 86.63, and Japan’s, Daichi Hara, received the bronze medal with a score of 82.19.
Not only has Graham become Australia’s first Olympic Medallist at the PyeongChang Winter Olympic Games, but Australia’s eleventh Winter Olympic medallist of all time.
He had achieved four podium finishes within the 2016/2017 world cup season, with three bronze medals and one silver, coming into the Winter Olympic Games.
At the age of 19, Graham made his Olympic debut in moguls at the Sochi 2014 Winter Olympic Games, heartbreakingly missing out on the super-finals by 0.01 of a point to American mogul skier, Deneen.
After being away from home for long periods of time and training extensively, Graham said that he believed it was all worth it for his 2018 silver medal.
“These past 12 months have been really brutal, and I’ve been home for less than 70 days of the year, and it’s all worth it now,” Graham told Coast Community News from PyeongChang.
“It’s the best feeling in the world,” he said.
Graham’s ski journey began from a young age with endless support from his family.
Originally a budding sailor on Central Coast waters, he started his skiing journey after family ski trips to Perisher Blue Ski Resort in the Snowy Mountains.
“I first skied when I was three years old with the family and it started off as just family holiday,” he said.
“I joined the Perisher Winter sports program when I was seven and it just snowballed from there.
“It’s where we found the passion,” Graham said.
Graham had tried all aspects of skiing whilst training at Perisher but found moguls to be his favourite.
“I think it was the challenge of it, it’s so bloody hard and I guess it encompasses so many aspects of skiing,” said the Olympic silver medallist.
When it came to the gruelling task of deciding between the waves and the slopes, Graham chose to follow the family connection of skiing and began to see his potential as a competitive skier.
“I knew from a pretty early age I had more potential with skiing than sailing.
“I knew I was in a good position from a young age with the sport,” Graham said.
Graham’s sporting career became challenging for himself and his family, travelling to Perisher Blue every Friday night and returning to Gosford on the Sunday in the Winter months.
“The six-hour drive twice a week, the thing that kept us going, was the fact that we enjoyed skiing so much.
“Once I started getting selected in teams, I started spending a lot of time away from school.”
Matt Graham said he was thankful for having a strong support network starting with his family.
“My closest support network is my family, they’ve been there from day one, along with my coaches, my support staff and the Australian skiing community.
“They’ve pushed me as hard as they can, and without them, I’d be less of a skier,” he said.
The Australian Sports Commission (ASC) Chief Executive, Kate Palmer, said of his medal victory: “Matt described it best when he said that the final 25 second run was the summation of a lifetime’s work, because his silver medal performance represents the dedication he, his family and his support network have shown over his 23 years.
“Matt deserves to savour this moment and it’s incredible that his network of family, friends and his high-performance support staff can share the jubilation with him,” Palmer said.
The 23 year old said that he would return to the 2022 Beijing Winter Olympic Games.
“I’m only 23 years old and I’m looking forward to the future and getting back to work soon, in due time, I’ll be back.”
Until then, the young silver medallist will be undertaking the rest of his double degree at the University of Newcastle.
After making Australian history, Matt Graham said he still called the Central Coast home.
“Overall, I would like to thank the Central Coast community for getting behind me and I see the Central Coast as a small, close knit community”.