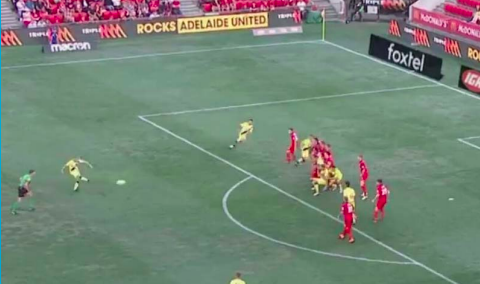 Hoole's free kick put the Mariners in front in Adelaide

Despite taking a 2-0 lead away from home, the Central Coast Mariners drew with Adelaide United when a late equaliser completed a comeback for the Reds.

The two Mariners’ goals both came as a result of Andrew Hoole set pieces, who finished the night with a goal and an assist, to give his side a 2-0 lead. Unfortunately for the Mariners, their two goals were cancelled out by second-half goals to Jordan Elsey and George Blackwood. It was a drama-filled first half in the city of churches that saw the Mariners take an early lead. After earning a freekick at the top of the box in the sixth minute, Hoole curled his shot perfectly into Izzo’s bottom corner. Ten minutes later, the uphill battle became even harder for Adelaide, when they were reduced to 10 men after Ersan Gulum was shown red for his challenge on Trent Buhagiar. Hoole had his hand in everything during the first half and played a precision ball from inside his own half to release Buhagiar, who was then faced with a one-on-one opportunity. Before he could pull the trigger, he was cut down by Gulum.

The Mariners continued their domination in the first half, with a one-man advantage, and took the game to Adelaide United at Coopers Stadium. It was a former Mariner that kept his side in the hunt. Paul Izzo made a run of impressive saves to keep his side just 1-0 down. The first crucial save denied a strike from distance by Jacob Melling, the second was a sharp left-handed diving save to stop a point blank Alan Baro volley, and the third stopped Hoole from scoring his second goal of the night from distance. The Mariners then had the final clear-cut chance of the first half, when Buhagiar sent a precise diagonal ball to the chest of a charging Blake Powell in the box. Powell controlled and shot, but Izzo was again on hand to keep it 1-0, which is how it stayed going into halftime. Less than 10 minutes into the second half, the Mariners doubled their lead through another Hoole set piece. Hoole’s corner was right in the mixer, and unfortunately for the home side, it deflected off their defender, Ryan Strain, to make it 2-0 for the Mariners.

It was almost 3-0 in the 59th minute, when some impressive one-touch football found Hoole on the edge of the box, he then played a precision cross into the box that just missed a sliding Buhagiar. The Mariners were made to pay for that miss just minutes later when Elsey put Adelaide on the scoresheet with a header. In a hectic final 30 minutes of play, the Yellow and Navy were forced to defend for their lives, as Adelaide worked desperately to equalise. That equaliser became a reality in the 83rd minute through Blackwood, who made no mistake, with an emphatic finish. “We lost some points here tonight,” Coach, Paul Okon, said after the match. “We had a two-goal lead and we had the chance when Hoole cut back to Trent with an open goal to make it 3-0 and probably the game’s over. “2-0 is always a dangerous scoreline. “Adelaide gained some momentum and we didn’t take advantage of having the extra man as much as we would have liked. “We handed the ball over too much, it became a transition game, which suits Adelaide. “They are very much a team that waits for you to lose the ball and then they’re off. “I think in the end, they probably deserved their point.

“There are some positives. “The fact that we had the two-goal lead. “I thought when we used the ball well we were dangerous and threatening. “Maybe, in the end, it’s because we haven’t won for a while, a few panic sets in, maybe we’ve forgotten how to win. “All of those things start to creep in. “They throw a big boy on up front, and every time the ball goes wide, it’s going to come into the box and we need to defend. “We dealt with a number of set pieces, they didn’t get one delivery wrong. “All in all, the fact that we were 2-0 up away to Adelaide, you think you should win the game. “There’s a very disappointed dressing room in there because you would have thought that we win this football game. “Last year, we felt as though we weren’t competitive in every game – certainly this season I believe we’ve done that. “We’re still not there yet and we know that we understand where we are as a football club, economically as well. “It’s disappointing, it’s disappointing for our fans, but with seven games to go, we need to keep fighting to win every game,” Okon said.