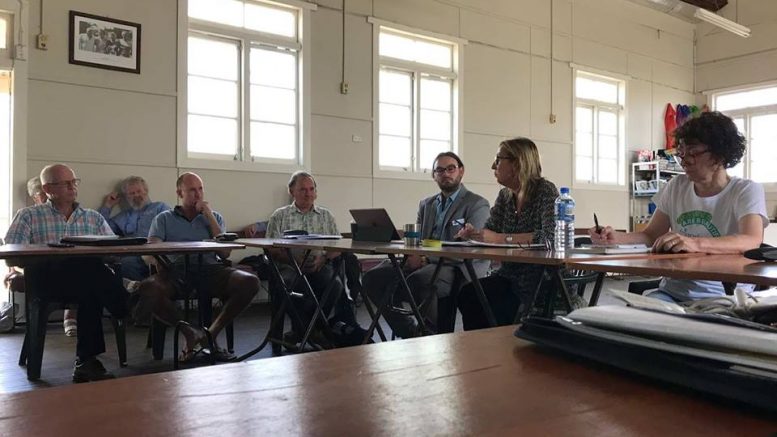 The Mangrove Mountain and Spencer advisory committee held its inaugural meeting at the Mangrove Mountain Hall on Tuesday, January 30, to bed down issues such as its terms of reference and frequency of meetings.
All members of the committee were required by Central Coast Council to attend code of conduct training which was held in Wyong on the day before the meeting.
The first meeting considered a draft terms of reference for the committee.
The draft terms of reference identified the responsibilities of the committee as providing advice and feedback to Council on the current situation at the Mangrove Mountain landfill site and the illegal dumping at Spencer, recommendations to address issues raised relating to the Mangrove Mountain landfill site the illegal dumping at Spencer, and, the implementation of actions in relation to Mangrove Mountain landfill site and the illegal dumping at Spencer.
According to the draft terms of reference, the membership of the committee consists of Mayor Jane Smith, Deputy Mayor Chris Holstein, Councillors Troy Marquart, Richard Mehrtens, and Kyle MacGregor.
Community representatives are: Mr John Asquith, chair of the Community Environment Network; Mr Gary Chestnut, a former Gosford Council employee; Dr Stephen Goodwin from the Mountain Districts Association; Mr Wolfgang Koerner from Central Coast Greens; Ms Margaret Pontifex of the Mangrove Mountain District Community Group Inc; Ms Marilyn Steiner from Mountain Districts Association; Mr Danny Willmott, a former trustee of the land; Mr Stephen Rickards, Ms Pam O’Sullivan, Ms Joy Cooper and Ms Lillias Bovell.
The councillors and community representatives will have voting rights.
The following Council staff will be non-voting members of the committee: the CEO, Executive Manager of Governance, Director of Environment and Planning, Director of Connected Communities and other relevant staff as required.
Directors can choose to send delegates.
All 11 local residents who expressed interest in joining the committee were invited to become members.

Mr Willmott and Mr Asquith gave their apologies for not attending the first meeting
An “external agency” membership category was created between the Council resolution that created the committee on October 9, and the first meeting on January 30.
The external agency that was invited to take part in the committee was the NSW Environment Protection Authority (EPA).
Community representative, Dr Stephen Goodwin, said he had objected to the EPA’s inclusion prior to the first committee meeting.
“I said a few community members would be reluctant to attend the meeting if the EPA was present,” Dr Goodwin said.
The Mountain District Association’s two-year campaign to stop the Mangrove Mountain landfill from reopening with a new Environmental Protection Licence, its calls for a commission of inquiry, and its goal of having the site permanently closed and remediated, has often taken aim at the EPA’s failure to properly enforce licence conditions prior to the 2014 Land and Environment Court action by the former Gosford Council.
Central Coast Mayor Jane Smith said the EPA was listed as a stakeholder not a voting member.
“I think it is important to have the EPA in the room at some point,” Mayor Smith said.
“I understand there are concerns from the community about having them there early in the process, but I am concerned that at some stage they need to be part of the process,” she said.
“I think the community has largely been disappointed in their performance.
“I think the point of the committee is to ensure that there is a very robust monitoring of what goes on and that Council does what it can to ensure the long term impacts of the landfill are minimised.”
The inclusion of the EPA in an external agencies membership category was debated at the first meeting, and a recommendation was sent to Council to remove them from the external membership category and call them non-member invitees.
The committee recommended that the NSW Office of Water be included as another non-member invitee.
The absence of Spencer community representatives on the Committee was due to the “way the Expressions of Interest fell out,” she said.
Mayor Smith said she had visited Spencer recently and spoke to residents who were concerned “that there were trucks starting again at Spencer and I know staff are monitoring the situation down there.
“The difficulty is that we are all concerned about the processes that have gone before.
“In my conversations, there is that issue that Central Coast Council is a different entity and doesn’t have the power to compel former staff to be part of an investigation,” she said.
“This issue has been going on for many years and it is only through community vigilance and activism that this issue has come to light.
“It has been a long battle and highlights the contribution community makes in alerting council to these issues.”
No formal voting rules apply as the committee has an advisory role.
Recommendations will be made by consensus, according to the draft terms of reference, and those recommendations will be provided to Council for consideration.
Community member, Mr Wolfgang Koerner, attempted to have the terms of reference amended to include a modified consensus of 75 per cent for issues on which full consensus could not be reached before making a recommendation to Council.
The absence of formal voting rules means there is no proxy voting nor a quorum and the chairperson will be able to use their discretion to determine if a meeting should be postponed due to insufficient members being able to attend.
Several community members called for meetings to be more frequent than quarterly, as proposed in the draft terms of reference.
Most community representatives and the councillors agreed that at least monthly meetings would be better, at least in the early period of the committee’s life.
“We need to do a lot at the moment, we are sitting on a very, very dangerous situation,” said Ms Margaret Pontifex of the Mangrove Mountain District Community Group.
Mayor Smith said she used her discretion as chairperson of the committee to keep the meeting frequency at quarterly in the terms of reference, but to hold monthly meetings for the first three months.
It was also agreed to review meeting frequency at the end of the first three months.
Meetings of the advisory committee are open to the public, but members are not permitted to speak to the media or make representations on social media on behalf of the Advisory Committee or Council, unless approved by Council.