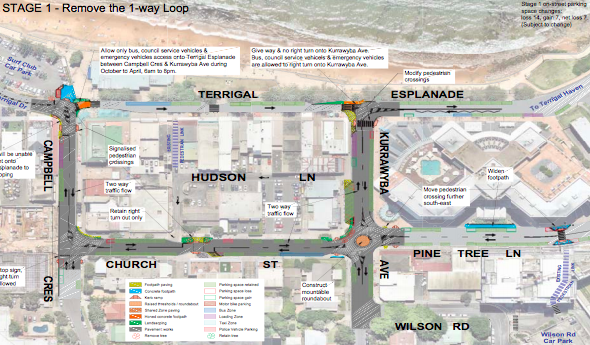 Council will shortly commence consultation with the community on a series of projects in and around the Terrigal commercial precinct, said Mayor Jane Smith. She said as Terrigal continues to grow as a popular destination for visitors and Central Coast residents, Council is working to enhance the amenity of the area through the delivery of major infrastructure and urban design projects. “Throughout February, Council will be providing information to the community and seeking feedback on key projects, including changes to traffic flow through the Terrigal CBD, and the installation of smart parking sensors to improve parking in the area,”

Mayor Smith said. “Once completed, these projects will improve traffic flow and parking as well as deliver improvements to the general amenity of the area for tourists and residents alike. “I encourage the community to come along to one of our Let’s Talk Terrigal information sessions.” The works planned for Terrigal CBD, valued at $2,209,000, have been funded through the NSW State Government’s Stronger Communities Fund, made available to all newly merged Councils. The installation of smart parking sensors, including the development of a smartphone App that the community can use to find their closest available parking space, has been made possible through a grant of $114,000 from the Australian Government’s Smart Cities and Suburbs Program.

Council is also investigating further opportunities to improve parking in Terrigal as part of a region-wide parking strategy and will be seeking community input as this is developed. Information sessions will be held on Monday, February 26, and Wednesday, February 28, from 6:30 pm to 8:30 pm, at Terrigal Surf Club. Detail about the plans and projects planned for Terrigal can be found at the Council’s yourvoiceourcoast website. The design for the proposed traffic flow and pedestrian access changes was developed using feedback received from the community as part of a study conducted in 2016. The changes are to be delivered in two stages. Stage one involves the removal of the current one-way loop so traffic would flow both ways on Kurrawyba Ave, Church St and Campbell Cres. From October to April, between 6:00 am and 8:00 pm, only buses, Council service vehicles and emergency vehicles would have access to Terrigal Esp, between Campbell Cres and Kurrawyba Ave.

The intersection of the Esplanade and Kurrawyba Ave would include a give way sign for vehicles travelling towards the Haven and there would be no right turn from the Esplanade into Kurrawyba with the exception of buses, Council and emergency services vehicles. Pedestrian crossings would be modified and there would be a mountable roundabout installed on the corner of Church St, Kurrawyba and Pine Tree La. In stage two, the vehicle access and movement restrictions implemented in stage one would continue to be enforced. Terrigal Esp would permanently be converted into a shared zone with a 10km per hour speed limit, pedestrian right of way and parking only allowable within designated spots. Part of Hudson La would also be converted into a shared zone. Stage two also includes improved parking on Ash St. Community feedback is open until March 2.