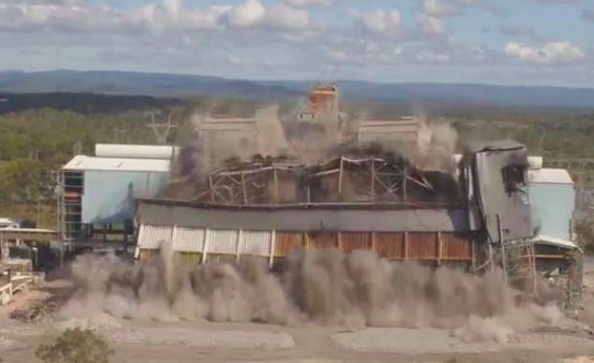 The demolition was carried out at around 9:00am. The boilers were the largest demolished in NSW so far. Weighing in at 32,200 tonnes and 60 metres in height, the combined boilers and coal hoppers were amongst the heaviest structures to be demolished using explosives in Australia. Contracted to carry out the demolition of the entire power station, specialist contractor, Liberty Industrial, used a controlled blast to bring the boilers down. Following the successful demolition of the chimney stacks in March 2017, and boilers three and four in May 2017, the blast was the last explosive demolition event to be carried out during the course of the power station’s removal.

The demolition of the 60 metre high, 32,200-tonne boiler house was achieved utilising an engineered induced collapse technique. The process involved a carefully designed and calculated sequence of structural pre-weakening explosions, followed by the detonation of strategically placed explosives charges to collapse the structure in a predetermined direction. The technique was used to safely reduce the structure to a suitable height for mechanical processing. Liberty Industrial’s giant demolition excavator was put to work processing the debris. The machine boasts the largest demolition shear anywhere in the world and will make light work of the large steel members associated with the heavy boilers. Liberty Industrial Director, Mr Simon Gill, praised the project team for their efforts. “Wonderful to see the final explosive demolition event safely completed at Munmorah Power Station.

“Our site team has worked tirelessly over the past three months preparing for this event,” Mr Gill said. “The success of this event is a testament to their dedication and hard work, and further highlights Liberty Industrial’s capability in the field of explosive demolition,” he said. Stephen Saladine, Managing Director of Generator Property Management (GPM), said, “As we near completion of the demolition of the former Power Station site, it’s timely to acknowledge the great work of the team that has managed and executed these events. “This team is made up of local and international experts with highly specialised knowledge. “Ensuring all checks are made and key stakeholders are informed of the progress, is an integral part of the process, and GPM continues to work closely with authorities to achieve a safe and environmentally responsible outcome.” One final major demolition event is planned for 2018 and the completion of the removal of the power station is expected to be finalised by October, 2018.