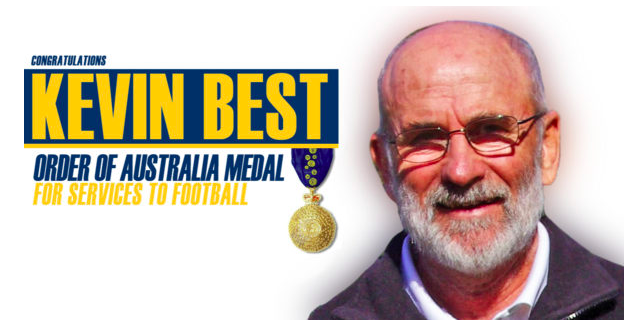 Kevin Frank Best, a resident of Wyoming, has received an OAM for service to football in New South Wales.
“It’s a great honour and ill carry it very proudly,” Mr Best said.
Mr Best is currently the Chairman on the Executive Advisory Committee for the Wyoming Football Club.
Mr Best has been involved in numerous clubs across NSW, including the Wyoming Football Club, the Central Coast Football Association, Hurlstone Park Wanderers Football Club, and the East Bankstown Club.
Throughout his career, he has been a player, a coach, a member of administrative teams, and a dedicated historian for the football community.
“This award, it’s not for me, it’s for the people who have helped me to achieve what I’ve done,” Mr Best said.
For Mr Best, football has been far more than a sport.
“It’s very rewarding in regard to the people you meet and the people you associate with,” he said.
“It’s a passion and I don’t know where I got it from, but I had a good life as a player, enjoyed it immensely. and formed amazing friendships through that,” he said.
Mr Best attributes many of his relationships, including that of his wife and many close friends, to the game.
“The sport in itself is great, just for the fact that you meet people and connect with people,” Mr Best said.
Over the last three years, Mr Best, alongside a team of researchers, historians and members of the football community, worked to piece together the history of football on the Central Coast for future generations.
Mr Best said he believed preserving the history of the game was important for the football community in years to come.
“The history of the game is primarily important because there needs to be a past, and today, a lot of people are thinking only about today, some think about tomorrow, but nobody thinks about yesterday,” Mr Best said.
“There’s not too many clubs that can have a proper historical record and we’ve been fortunate to get a good team together to do that,” he said.
“I was probably fortunate that people around me have seen what the importance of it is and want it to be recognised, but to me, it’s just a normal day’s work to keep things going and moving properly.”
Mr Best said he believed the award carried importance for the entire community of the Central Coast.
“I think it’s a great shot in the arm on the Central Coast,” Mr Best said.
“It’s so important to me in representing the whole of Central Coast Football and putting what we’ve done on the map,” he said.
Central Coast Football said Kevin has made a lifelong contribution to the sport of football in all aspects of the code including as a player, coach, administrator, historian, archivist and author.
“Despite being almost 70 years of age, his dedication to the sport remains as strong and passionate as ever, especially in his determination to address the deficiencies in the preparation of young players at the grassroots level,” it said, when announcing the honour.
“Importantly, Kevin has made all of these contributions on a voluntary basis and has never sought or received any financial gain.
“Indeed, although few know it, he has on a number of occasions covered the cost of many of his programs and historical research out of his own pocket.
“Kevin Best’s contributions to football on the Central Coast are legendary and there are few, if any, more highly respected people in the region.
“This respect is based not just in the remarkable contributions that he has made, but also in the manner that he has conducted himself throughout, a manner that reflects the highest of community standards and with extreme modesty, good humour and composure under pressure.
“Among the numerous honours and awards that Kevin has received are: 1974 Hurlstone Park Wanderers Football Club Life Membership; 1975 Wyoming Football Club Senior Player of the Year; 1979 Central Coast Football Services to the Game Trophy;1979 Wyoming Football Club Life Membership; 1984 Gosford City Council Australia Day award for services to soccer; 1986 Wyoming Football Club Senior Player of the Year; 1992 Central Coast Football Life Membership; 1996 2GO Radio Central Coast Sports Person of the Year; 2010 Researching and Co-Writing ‘Tiger Tales The History of the Wyoming FC 1970-2010’; 2011 Wyoming Football Club Medal for Continuing Long Service to the Club; and, 2013 Researching and Co-Writing ‘The History of Central Coast Football 1963-2013’.