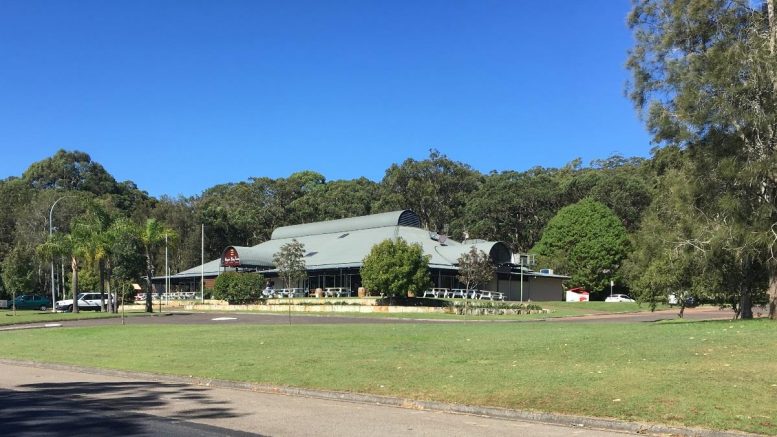 Looking towards the front north and western elevation

A local hotel has applied for permission to undertake a $2 million renovation.
The Empire Bay Tavern has applied to Central Coast Council for permission to undertake the refurbishment of its premises in Pool Close, Empire Bay.
The work would include a new children’s play area, new dining terrace, refurbished outdoor sports area, a new gaming room and sports terrace.
Another application has been lodged to modify the kitchen and the waste disposal area located in the south-eastern corner of the tavern.
Reports prepared for the developer to support the application said the alterations were intended to deliver “an enhanced upgrade and high-quality refurbishment of an iconic corner tavern to improve patron amenity through accessibility and the internal presentation through provision of more generous space for dining, children’s play areas gaming.
“This will result in a substantial investment in a local establishment which will extend its economic life and improve its utility to the benefit of the local and wider communities.”
Consent for the hotel was originally granted in November 1982 and since then various refurbishments have been approved.
The hotel is on a 1.285 hectare allotment located on the south-west corner of the intersection between Wards Hill Rd and Poole Cl and has vehicular access via both road reserves.
It is located at the foot of Wards Hill which serves as “the gateway to the Killcare and Bouddi Peninsula”.
The tavern currently operates as a bar, bistro, game room and bottle shop.
In more recent times, the current owners have upgraded the tavern and surround with interior redesign and landscaping and connected a reticulated sewerage system.
“Since the tavern was erected, the operations have expanded to include a commercial kitchen, large open internal dining area, outdoor-alfresco areas, kids play areas, gaming area, and bar surrounded by a hard stand area for vehicular access and parking.”
The application stated: “The siting of the minor alterations to the existing tavern would be located entirely upon the cleared portion of the allotment within the 7(c2) zone and is regarded as a small-scale development that would not be detrimental to the inherent natural attributes of the site and allow the maintaining of the scenic qualities of the 7(c2) conservation zone.”
However, the applicant has not included any additional parking spaces when the Gosford Development Control Plan 2013 requires 20 additional spaces to the existing 88 to cater for additional patronage.
“A Traffic and Parking Assessment has been prepared by SECA Solution that addresses the impact of the proposed development on the surrounding road network, as well as traffic access,” the applicant’s statement said.
“Parking beat surveys completed within the existing carpark indicate that during the busiest periods there was a minimum of 25 empty parking spaces available within the tavern carpark.
“Allowing for this the increased parking demands associated with the proposed expansion of the tavern can be accommodated within the existing parking provision,” the traffic and parking assessment concluded.
The applicant also argued the proposal would result in positive social and economic effects through the creation of employment during construction; and the creation of improved facilities and services for patrons to a local ‘establishment’.