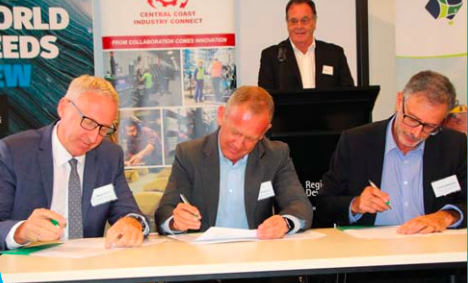 UON, RDACC and CCIC sign a Memorandum of Understanding

A partnership between the University of Newcastle, Regional Development Australia (RDA) Central Coast NSW, and Central Coast Industry Connect (CCIC) has been established to build the Coast’s reputation as an internationally renowned centre of excellence in food innovation.

A Memorandum of Understanding was signed by representatives of the three groups on Friday, February 2, The Central Coast Food Innovation Region Initiative is about leveraging the Central Coast’s existing strengths and realising economic benefit through growing and innovating the local food industry. The premium food, food security and food innovation movement is gaining momentum around the world and gradually being embraced on the Central Coast. International research has shown that innovating the food value chain is integral to enhancing regional economic development. The overarching objective of this initiative is to grow jobs, build regional business competitiveness and encourage national and international trade. This will be achieved through a united vision, unprecedented collaboration, innovation, education and research. The initiative has been endorsed by regional industry and strategy groups, Council and state government departments as a strategic regional initiative to drive economic growth.

RDA Central Coast has successfully coordinated a number of catalyst projects which include: mapping food related activity across key regional stakeholders; undertaking stakeholder and industry consultation; and, developing catalyst projects that would attract State and Federal Funding. In June, 2016, RDA Central Coast delivered a catalyst project which engaged local growers to take the first step in establishing a local value chain with local end consumers. A group of industry representatives has been created to develop the Central Coast Food Collective. This initiative has resulted in the formal establishment of the organisation as a Not for Profit entity. An independent report was commissioned by RDA Central Coast from RMIT University to confirm the Food Innovation initiative’s broad intentions, major projects and potential regional benefits. Marketing the Central Coast as a food destination initiative has commenced with the production of a video highlighting regional food suppliers and users.

A proposed Food Innovation Centre has been shortlisted as one of the priority projects for the region. In 2017, RDA Central Coast and CCIC partnered to deliver a sustainable food innovation manufacturing model. CCIC and RDA Central Coast have held a number of high-level meetings and have gained support from the University of Newcastle, Monash University, RMIT University, CSIRO, FIAL, all levels of government and regional business leaders, to discuss opportunities to deliver the industry, technical, educational, innovation, entrepreneurial and advanced manufacturing components of the Food Innovation Region Initiative.

In December 2017, the parties agreed to formally develop the partnership MOU, which was signed on February 2 The partnership with the University of Newcastle and NIER will allow the Central Coast to leverage expertise from the recently implemented Global Impact Cluster for Energy, Resources, Food and Water, which is aimed at accelerating innovation in the food and agriculture sectors through focused industry engagement, transdisciplinary research collaboration and commercial output. Over the coming months, an implementation strategy will be jointly developed by RDA Central Coast and CCIC in partnership with the University of Newcastle and NIER, in consultation with all relevant regional stakeholders, including industry, the education sector and all levels of government.